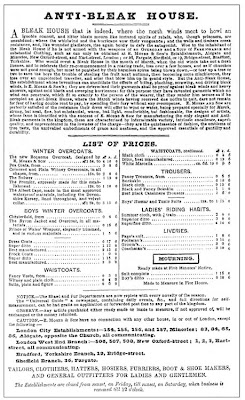 Bleak House, like many Victorian novels, was published in serial format. Each monthly installment was sandwiched between advertisements which, in many cases, constituted half of the total number of pages of the volume. The above advertisement appeared inside the back cover; it reads:

A BLEAK HOUSE that is indeed, where the north winds meet to howl an ignoble concert, and bitter blasts mourn like tortured spirits of rebels, who, though prisoners, are unsubdued; where the whirlwind and the hurricane vow their vengeance; and the walls and timbers creek resistance, and like wounded gladiators, rise again boldly to defy the antagonist. Woe to the inhabitant of the Bleak House if he is not armed with the weapons of an OVERCOAT and a SUIT of FASHIONABLE and substantial Clothing, such as can only be obtained at E. MOSES & SON'S Establishments, Aldgate, and Minories, New Oxford-street, and Hart-street, London; or 36, Fargate, Sheffield, or 19, Bridge-street, Bradford, Yorkshire . . .

Look at the prose! one might argue; Now compare that to contemporary car commercials, and tell us we aren't getting stupider.

But in 150 years, those car commercials will be read -- already are being read -- through semiotics: that is, the ad either sells cars or fails according to its manipulation of postpostmodern American signs. "Anti-Bleak House" passes beautifully in this regard because the artistic and comedic symbols it engages were at a premium in middle class mid-19th century readers, who valued flowery prose and a punchy pun.

It's not what the ad says; it's whether it sells the coat.
file under: advertising, bleak house, consumerism, dickens, technodeterminism