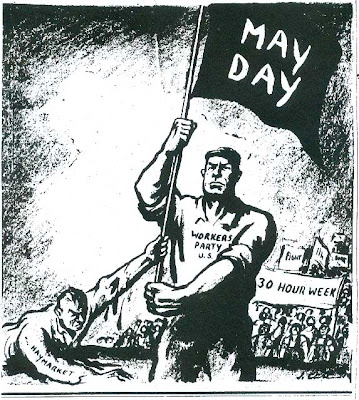 May 1st has a strange history. With roots in pagan celebrations, such as the Celtic Beltane festivals, it later became Christianized as a celebration of the Virgin Mary during which children decorated images of Mary with flowers and ribbons. As you might expect, the pagan celebrations of May Day -- dancing around a Maypole, wearing animal masks, trading "May baskets" of candies and flowers, crowning a May Queen -- were absorbed into the Christian celebrations, although outlying villages still celebrated in much the same way they had for centuries, causing the Brits to ban May Day in the 1600s. Many places in the UK still hold May Day celebrations that include some combination of the pagan, Catholic and secular traditions. (For more, see this great post at La Revue Gauche.)

The second meaning of May Day has little to do with its pagan origins. On May 1, 1886, as workers across the Western world for striking for an eight-hour day, the Haymarket riots shook Chicago, where police attacked and brutalized the strikers, eventually killing six of them. As the workers continued their strike into the next day, a bomb exploded in the crowd, killing eight demonstrators. Eight of the anarchists organizing the strikes were arrested and charged with throwing the bomb, marking the beginning of one of America's most infamous trials.

In honor the Haymarket Martyrs, the International Working Men's Association declared May 1st a working class holiday in 1889, raising a red May Day flag in honor of their spilled blood. Today, much of the world still celebrates May 1st as International Workers' Day, recognizing the acheivements and sacrifices of the labor movement, whom you can thank for your eight-hour work day, a minimum wage, the two-day weekend, and paid holidays.

Of course, the U.S. wasn't having that for long -- leading to the third, and least known, meaning of May Day. In 1958, Congress declared May 1 as Loyalty Day, during which Americans are (supposed to) reaffirm their loyalty to the U.S. government. Really, it was done just to show up the Soviets. A kind of international raspberry on International Worker's Day.

Whatever aspect of it you celebrate, Happy May Day.
file under: labor, may day, progressives