by Whitney
I just read "The Social Construction of Facts and Artifacts," Trevor J. Pinch and Wiebe E. Bijker's seminal essay defending the social constructivist approach to the philosophy of technology. Should be neat stuff. Unfortunately, I was completely distracted by utterly pointless and confusing diagrams that "illustrate" the essay's main ideas.

Witness Figure 1: "A six-stage model of the innovation process."

Simple, to the point -- some might even say a little pointless, but I'll give it to them. There's a lot of pressure in the social sciences to diagram everything, even an idea as straightforward as "linear progression."

Then Figure 2 steps up, with its "multidirectional view of the developmental process of the Penny Farthing bicycle": 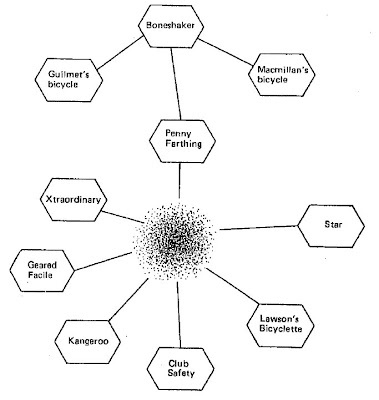 A little more confusing, since the most important part of the diagram is represented by a thumbprint or scattershot or something. But, in their defense, Pinch and Bijker provide a helpful caption: "The shaded area is filled in and magnified in figure 11. The hexagons symbolize artifacts."

See, the hexagons that are labeled with the names of artifacts -- those symbolize artifacts. Get it? 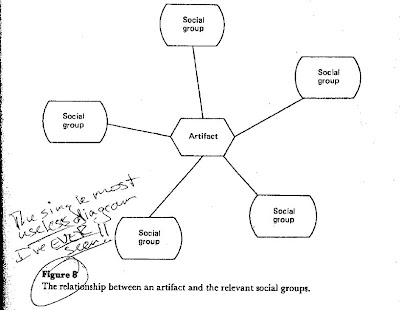 I have to say, this is the point where I began to question Pinch and Bijker's ability to diagram. Apparantly, I'm not alone. (The scan I'm reading is from my professor, whose marginal notes are both insightful and hilarious.) Not only does this "visualization" visualize precisely nothing, it also manages to look awkward doing so. A hexagon is employed to represent what should be a pentagon; the lines meet the shapes at seemingly random points; and, although the whole thing is supposed to represent the "relationship" between artifacts and social groups, there's no visual differentiation between different shapes, lines or points of connection.

This is a truly awful bit of diagramming.

And, just when I thought it could get no worse, there was Figure 9. "The relationship between one problem and it's possible solutions." 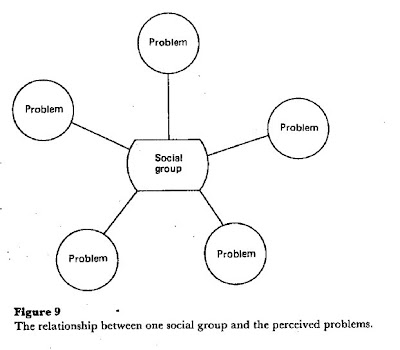 Bravo, gentlemen. Only diagrammers of your stature could come up with a visualization this awesomely bad.
file under: visualizations

I love your professor's notes!