by Whitney
I can't say why this piece, "The Sea," mesmerized me so much this morning. I think it has something to do with how it's using sound -- not just as a kind of ambient background noise, as in so much digital poetry, but actually as the prosody of the poem. In other words, the aural time of the song -- how each beat is distributed across a discrete chunk of time (the measure) -- assumes the traditional role of the line, which distributes stresses across a discrete chunk of space. Yet the the "line" doesn't completely disappear; it's morphed and stretched to fit into its new realty, screen space.

Given my thesis topic, I've been thinking a lot lately about how to conceptualize the unit of the "line" in poetry, and how it might translate into other media. So much, if not all, of our understanding of meter and prosody was born from poetry laid out on the printed page; we're taught to read each word aloud, find the syllable divisions, mark each stress with a pen. This process is designed to map sound onto the written word. For the "poems" that I'm exploring from the seventeenth-century, though, prosody came before the text it describes -- it was a system into which language was poured. In the case of Juan Caramuel's Maria Stella (below), syllable and stress divisions were built as a kind of machine, and whatever language was automatically generated from it seemed almost inconsequential. The same thing happens in so many digital poems, where the sound and visual appearance of words take on a dimension that in many ways seems prior to whatever text pops out. How can we generalize the rules and theories of meter (broadly construed) so as to be useful for the study of poetry in all media? 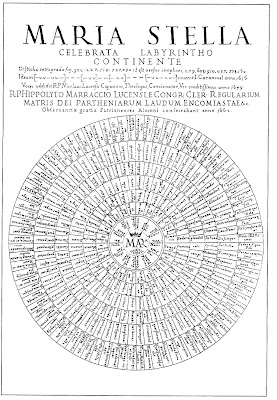 (If this is of interest, Charles O. Hartman has a fascinating and still insightful discussion on designing and using computer programs to study prosody in his 1996 book, The Virtual Muse. The field of prosody/meter almost needs to find new ways of talking about itself, considering how dead it is right now. Anyway, check it out.)
file under: digital literature, juan caramuel, poetry