the body as book, and the book as body

by Whitney
I've come upon so many references to the book as a body, or the body as a book, recently. The book is a corpus bound along its spine; the index points readers in the right direction (indicat), like an index finger; the appendix is both an organ and a text, each supplemental in its own way. To 'articulate' means both to unite limbs at the joints and to join separate utterances -- but, as Michel de Certeau argues, "printing represents this articulation of the text on the body through writing." In fact, according to de Certeau the very tools of writing are connected to the tools of surgery:

The flesh that has been cut out or added to, putrefied or put back together tells the story of the high deeds of all these tools, these incorruptible heroes... Instruments are thus distinguished by the action they perform: cutting, tearing out, extracting, removing, etc., or else inserting, installing, attaching, covering up, assembling, sewing together, articulating, etc. -- without mentioning those substituted for missing or deteriorated organs, such as heart valves and regulators, prosthetic joints, pins implanted in the femur, artificial irises, substitute ear bones . . (de Certeau 139, 141)

I can't help but think again of the Dictionary of the Khazars and the Marx brothers, with their images of the body that writes itself into being on its own flesh. Add to that list now The Comedy of Errors, in which Dromia the slave says to his master Antipholus, "If the skin were parchment and the blows you gave were ink / Your own handwriting would tell you what I think . . ."

Even the word 'book' -- from the Old English boc, a relative of 'beech', the material from which writing tablets were made -- may share its woody roots (pun intended) with 'body', or, in Old English, bodig, meaning the 'trunk' of a man.

And if we want to get molecular, we are all -- humans, trees, animals, insects -- just a kind of "spectacular information technology" preserving the archival material of DNA; we are each a chemical copyist, re-writing the original text. Richard Dawkins discusses this very thoughtfully in The Blind Watchmaker, a book this body has been reading bit by bit.

DNA's performance as an archival medium is spectacular. In its capacity to preserve a message it far outdoes tablets of stone. Cows and pea plants (and, indeed, all the rest of us) have an almost identical gene called the histone H4 gene. The DNA text is 306 characters long. ... Cows and peas differ from each other in only two characters out of these 306. (Dawkins 174-5) 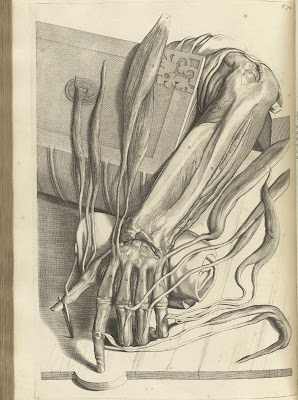 [From Govard Bidloo, Ontleding des menschelyken lichaams (Amsterdam, 1690); if it looks familiar, you may have seen William Cowper's 1698 edition, The Anatomy Of Humane Bodies, With Figures Drawn After The Life By some Of The Best Masters in Europe. Cowper bought the plates from Bidloo, translated the text and sold it as his own without giving Bidloo credit -- in other words, he plagiarized it. link]
file under: body, books