mapping the territory of the page: Martin Opitz's "Aristarchus"

by Whitney
One of the first texts I look at in my thesis is "Aristarchus, sive de contemptu linguae Teutonicae" ("Aristarchus, or on the neglect of the German language," 1617/1618), by Martin Opitz. Opitz is one of the more well-known poets of the German Baroque, sometimes described as the founding father of German poetry, but "Aristarchus" is rarely discussed at length in the literature. After a quick nod at Opitz's first published work and a little snark over the irony of defending German in Latin, most scholars move on to more "sophisticated" texts -- namely, Opitz's Buch von der deutschen Poeterey, published around six years later in 1624.

Fair enough. It's not Opitz's masterpiece. But, when properly contextualized -- that is, when not seen as a mere road bump on the way to Buch -- it might be one of his most fascinating.

Crash course in the political history of central Europe during the sixteenth and early seventeenth centuries (historians, skip!): The Holy Roman Empire is a mess. Every Hans, Georg and Günther rules his own fiefdom -- around three hundred altogether, all grouped under the central governance of a Habsburg Emperor. Foreign leaders hold land within the Burgundian circle, German rulers hold foreign territories -- hell, even Emperor Charles V himself rules the Spanish realms of Castile and Aragon, causing some of the princes he supposedly rules over to cement alternative alliances with France, enemy to the Habsburgs.

The Protestant Reformation only makes things worse, eventually leading to a policy of cuius regio, eius religio: that is, whatever religion the leader of any state or city within the Empire chooses to follow, all his subjects must follow, too. Sounds good on paper, but it actually ends up cementing religious divisions through a policy mutual hatred and intolerance, destroying any lingering sense of unity among the scattered states. C. V. Wedgwood, in her classic book on the Thirty Years' War, points out (very smartly, I think) that the whole cuius regio, eius religio thing was doomed from the start, since Protestant rulers "were demanding from the Emperor what they refused to their own people" -- i.e., religious freedom. In fact, anyone who didn't convert to his or her ruler's religion was forced to move, leading to mass migrations that only further destabilized the region.

So 1618 rolls around, and someone gets the bright idea of electing Ferdinand II, a Habsburg and a staunch Catholic, to be King of the largely Protestant state of Bohemia. The Protestant nobility wouldn't have it and threw Ferdinand's representatives out a window, right onto a big stinking pile of manure. This rebellious act, known as the Second Defenestration of Prague (yep, there's a first -- the people of Prague love to defenestrate), started the long, messy Thirty Years' War.

Okay, the (brief and reductive) history lesson's over. Now, just as Ferdinand's imperial governors are falling -- quite luckily, I would say -- onto a pile of manure in Prague, Opitz was making his way up the Oder to Frankfurt an der Oder, where he would publish "Aristarchus."* "Whenever I think about our native German ancestors, strong men and indeed invincible," Opitz begins his essay, "I am knocked down by a certain quiet religiousness and a powerful reverent awe"; for the German tongue is "a charming tongue, a decent tongue, a serious tongue" well-suited to alexandrine and Neoclassical verse. Of course, Opitz does all this praising in Latin, which he describes as a "corrupt" language, the language of Catholicism; but he does use German when quoting his own poetry as an example of how German can be used for expressive purposes. When he switches to German, the text also switches from clean, justified rows of Roman typeface, like this -- 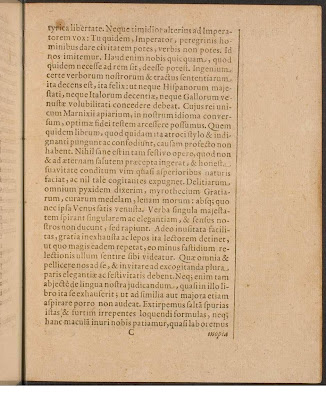 -- into a curling Gothic font that playfully defies the neat justification of Latin. Like this: 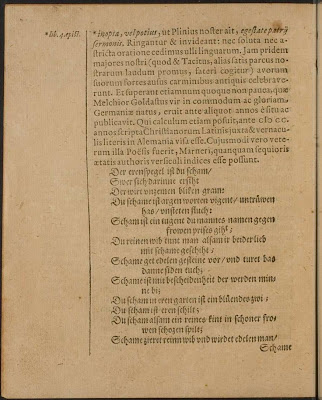 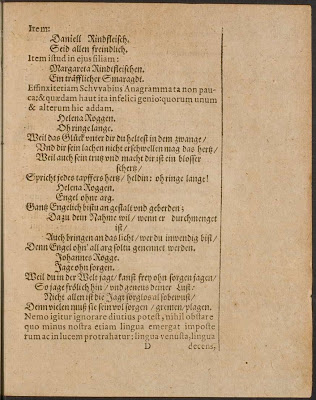 It's almost like the exiled, dispossessed native tongue is attempting to reclaim, even to re-colonize the page. In fact, on this page Latin is quite literally pushed to the edge, squashed between the enclosing ranks of German. Thus not only does the text reflect the kind of political battles being fought at the time, it actually becomes a soldier in the war, re-drawing territorial boundaries. Seen from this angle, "Aristarchus" doesn't ironically reinforce the need to use Latin but actually undermines it, forcing Latin toward the margins as German stakes a claim to its own space. The verses may be Neoclassical in form, but, as Opitz makes clear, they belong to German.

(All images from the WDB.)