by Whitney
Elli Mylonas of Brown's Scholarly Technology Group gave a wonderful talk at HyperStudio's humanites+DIGITAL Worskshop today. She began by looking back at the history of humanities computing, starting with Father Busa's hypertext concordance of Thomas Aquinas, then moving into close readings of the rhetoric and aesthetics of early humanities computing. Marie Antoinette on a computer, an engraving of a monk in front of a screen, 'COMPUTING' written in blocky "digital" fonts with 'Humanities' in a curly, romantic script -- all signal the stark distinction between humanists and technologists in ealy digital humanities.

Today, Ellie argued, this distinction isn't so stark. Humanists must be knowledgeable about media to work in digital humanities, partly because this thing we keep calling "digital humanities" is coalescing into a distinct field with its own interests, research questions and methodologies. Elli concluded with a call for us all to start documenting and sharing our work, so we can begin to build off each other, instead of always repeating the same mistakes.

In that spirit, I wanted to share a few projects Elli talked about:

// The Theater That Was Rome creates an interface for early books and prints scanned at the Brown libraries.

// Inscriptions of Israel Palestine "seeks to collect and make accessible over the Web all of the previously published inscriptions (and their English translations) of Israel/Palestine from the Persian period through the Islamic conquest (ca. 500 BCE - 640 CE)." Around 15,000 of these inscriptions exist, ranging from imperial delcations to notices of donations. They're an invaluable resource for historians seeking to hear those voices not collected in the literary/textual record -- in fact, it's quite jarring to read some of these deeply personal notes from so long ago. They also show an interesting range and use of different scripts and languages. 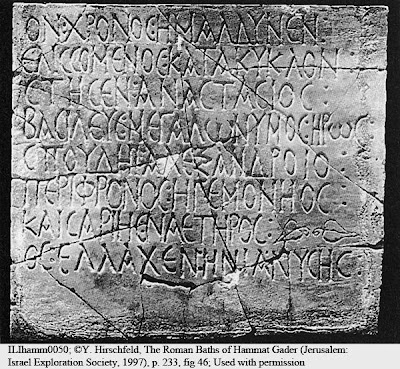 // Monarch "treats the monastic complex at Saint-Jean as an integrated, corporate whole rather than as a cluster of related buildings; as the physical expression of spiritual, social and economic motives rather than simply as a construction site." Very interesting use of the web to show the culture of spaces in an abbey, connecting rooms to narratives, texts, and contextualizing them within the life of the community.

All of these projects are historical in nature, and each takes a very different approach to its subject.

When looking at digital humanities projects, I (stupidly) often think: that's neat, but what good does it do if no one uses it? I'm so stuck on how these projects might make a difference for the discipline that I forget how incredibly transformative they can be for those involved in the production. In other words, I'm starting to realize that their value is not so much in what contribution they might make to a scholarly community (by providing access to rare materials, for instance, or fancy pedagogical tools) but in how the process of producing work in the digital humanities can in itself radically change the trajectory of a scholar's thought. It forces them to step outside the typical research ruts and look at their work from an entirely new and often foreign angle. Perhaps we should stop thinking about labs that produce and communities who use as two separate entities, and instead begin to see the production itself as a research project -- as something whose methodologies and potentials are worthy of documentation (as Elli pointed out) in themselves.
file under: conferences, digital humanities, history