by Whitney
Yesterday, I attended two panels at "The Gift of History", a symposium in honor of Natalie Zemon Davis's 80th birthday. I'll just briefly summarize some of the most interesting bits:

Cultural Artifacts
Robert Darnton chaired the panel on cultural artifacts -- by the way, does anyone else think Bob Darnton looks kind of like Warren Beatty's Dick Tracy? -- 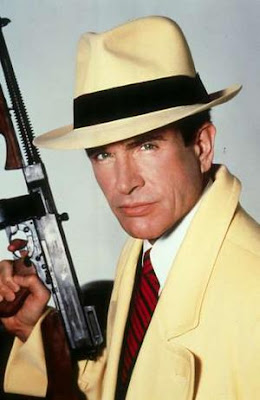 -- he's got the style of a 1930s gumshoe, albeit much more poise and intelligence. Anyway, Darnton opened the panel by talking about how different early modern books looked and felt, pointing out that even late into the eighteenth-century many were sold as loose sheets and compiled after purchase. He also talked about paragraphs and "anecdotes" -- traveling texts that can be traced from page to page, book to book throughout early book history. Culture is not a static thing, he pointed out, but something constantly in flux, in transition, and as such the best metaphor we've got right now is that of "negotiation."

Harry Liebersohn then took the stage to talk about the concept of the "gift." Although the notion of gift-giving rarely (if ever) shows up in nineteenth-century social theory, it became more popular with the publication Marcel Mauss's classic work The Gift in 1925. Liebersohn focused on "gift-giving at the margins": it "has the affect of reinforcing social totality," he argued, citing Nicholas Thomas's book Entangled Objects: Exchange, Material Culture, and Colonialism in the Pacific.

Dana Lightfoot then talked about the "unstable gift," the "volatility of giving and receiving" as she saw it in her work on women's negotiation of power in fifteenth-century Valencia.

But, for me, the most interesting talk was by Anne Goldgar, author of Tulipmania: Money, Knowledge and Honor in the Dutch Golden Age. Goldgar began with the question: how do we see historiography reflected in seashells and other objects of natural history? Natalie Zemon Davis writes about books as gifts, and about gifts as "signposts for relationships"; yet "material objects presented as gifts do not necessarily lead to happy communitarianism." Rather, Davis "gave the artifacts meaning by placing them in their greater social and cultural context." The same can be done with shells, objects placed prominently in curiosity cabinets to "create bonds and subgroups within society" -- in the words of Bourdieu, to create (early modern) taste. In this exchange, the tastes of the giver then became as important as the act of giving. 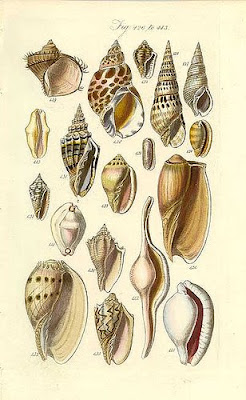 In early printed representations of shells, one can't distinguish between their scientific and artistic taste. The simple yet astonishing structures of seashells acted as emblems of spiritual repose and became a "means of self-definition and display." But how did they come into taste at all? To answer this question, Goldgar concluded, we have to think deeply about the materiality of material objects, and what materiality means for the past.

Boundaries, Margins and Braided Histories
I didn't take too many notes on this panel, since my laptop ran out of batteries and Harvard apparently takes a hard stance against wall outlets. I left, though, with a deep appreciation for Davis's metaphor of "braided histories."

As Ann Waltner pointed out, in a braid each strand remains individual, distinct, but comes together through a pattern of twisting and knotting. Of course, I instantly thought of a recent talk by Sherry Turkle on her book Falling for Science: Objects in Mind, in which she interviews science and engineering students on their relationship with objects. Turkle tells of an MIT student who recalled obsessively braiding her My Little Pony's tail as a little girl. Although her parents found their daughter's habit strange and even disturbing, the student now sees that she was learning recursion, a fundamental idea in mathematics and computer science. I love this image of separate togetherness, of unified individuality, particularly since it relates to well to a topic near to my research, ars combinatoria. Can we think of the braided histories not just of peoples or lands, but of the kinds of cultural artifacts Goldgar discussed?

While I'm ashamed to admit that I've only recently discovered Natalie Zemon Davis's writing -- hell, I've only recently discovered what a kickass discipline history can be! -- it's already had a huge impact on how I approach the objects I study. It was a privilege to watch her friends, colleagues and students honor her work.
file under: early modern, events, harvard, history, natalie zemon davis