why I love dictionaries

by Whitney
My obsession with dictionaries is admittedly strange -- but I kind of think others might get it if they took a look at this: 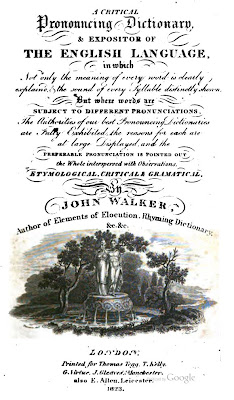 This the title page for an edition of John Walker's Critical Pronouncing Dictionary, described by preeminent lexicographer Sidney Landau as "one of the most popular and influential dictionaries ever published." That's not an understatement. In a fascinating article ("Walker's Influence on the Pronunciation of English", Publications of the Modern Language Association, 62 [1947]), Esther Sheldon outlines the many ways Walker changed English into what we speak today. For instance, he believed every syllable should be distinctly pronounced. Thus while 'med-sin' (two-syllables) would have been a common and even standard pronunciation for 'medicine' in eighteenth-century British English, Walker proscribes 'med-i-sin', and does the same for 'mackerel', 'fealty', 'mantua', 'arsenal', and 'porcelain'. I'll let Walker explain:


All our orthoepists tell us that this word is generally pronounced in two syllables, as if written medcine. That so gross a vulgarism should gain ground in our language, is an imputation on our national taste. Our poets, who, when tortured for a word to ease themselves, are generally guilty of one part only of the cruelty of Procrustes, and that is, of shortening such words as are too long for their verse; and these mutilations too often slide into our prosaic pronunciation: but against this abuse every accurate speaker ought to be on his guard. … Mr. Elphinston adopts the dissyllable pronunciation as more agreeable to its immediate origin, the French medicine: but as we preserve the i in this word, the Latin medicina seems its more authentic original, and demands the sound of the i in medicine, as much as in ominous, mutinous, and original, which Shakespeare and Milton sink in the same manner as the word in question. ( 323)

Walker also refuses to syncopate or level diphthongs like 'ia' in '-iate' -- so whereas, in the Standard English of his time, 'abbreviate' would be pronounced 'a-brev-yate' (three syllables), Walker encourages a "full" pronunciation: 'a-brev-i-ate' (four syllables). He also thinks words that have orthographically similar endings should rhyme and, following this rule, argues that 'gold' (pronounced with the closed, back, rounded vowel /u/ in late eighteenth-century England) should rhyme with 'fold' and 'old'. In determining these rules -- and this is the most fascinating part -- Walker consistently argues that pronunciation must always be anchored to a printed standard to avoid unnecessary drifting. And that's a statement that would take me many, many posts to unpack. 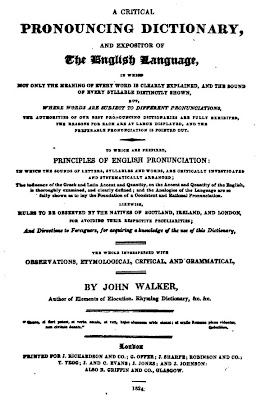 I came across a full scan of the dictionary on Google Books this morning (link). They don't make titles like that anymore. Or sentences, for that matter. In full:

A CRITICAL
PRONOUNCING DICTIONARY,
AND EXPOSITOR OF
The English Language,
IN WHICH
NOT ONLY THE MEANING OF EVERY WORD IS CLEARLY EXPLAINED, AND THE SOUND
OF EVERY SYLLABLE DISTINCTLY SHOWN,
BUT,
WHERE WORDS ARE SUBJECT TO DIFFERENT PRONUNCIATIONS,
THE AUTHORITIES OF OUR BEST PRONOUNCING DICTIONARIES ARE FULLY EXHIBITED,
THE REASONS FOR EACH ARE AT LARGE DISPLAYED, AND THE
PREFERABLE PRONUNCIATION IS POINTED OUT.

TO WHICH ARE PREFIXED,
PRINCIPLES OF ENGLISH PRONUNCIATION:
IN WHICH THE SOUNDS OF LETTERS, SYLLABLES AND WORDS, ARE CRITICALLY INVESTIGATED
AND SYSTEMATICALLY ARRANGED;

The influence of the Greek and Latin Accent and Quantity, on the Accent and Quantity of English,
is thoroughly examined, and clearly defined ; and the Analogies of the Language are so
fully shown as to lay the Foundation of a Consistetn and Rational Pronunciation.

LIKEWISE,
RULES TO BE OBSERVED BY THE NATIVES OF SCOTLAND, IRELAND, AND LONDON,
FOR AVOIDING THEIR RESPECTIVE PECULIARITIES;
And Directions to Foreigners, for acquiring a knowledge of the use of this Dictionary,

THE WHOLE INTERSPERSED WITH
OBSERVATIONS, ETYMOLOGICAL, CRITICAL, AND GRAMMATICAL,

The 1888 edition of Walker (a copy at Harvard) included

“Telegraphic Errors” pp lxxi-lxxiii
two pages of instruction, and a chart of “Common Errors in Telegraphy.” with columns for “Confound in Transmission with” and “Confound in Writing with.”

Walker, J. (Revised and Enlarged by J. Longmuir). The Rhyming Dictionary of the English Language / in which the whole language is arranged according to its terminations / with a copious introduction to the various uses of the work, and an index of allowable rhymes, with authorities for their usage from our best poets. London: George Routledge and Sons, 1888.

Among other uses of the Rhyming Dictionary, and one that will most commend it to commercial men, is the assistance it affords in deciphering errors in telegrams. All merchants having business relations with America or the Far East use Telegraph Codes, so arranged that each word in their Telegrams represents a whole sentence. Frequently, however, these words are so mutilated in transmission as to be almost unrecognizable. As a rule there is not much difficulty in finding the proper word if the ciphers (or symbolical words) in the code are alphabetically arranged, unless the first letters in it have been alterred or lost. It is especially in the latter case that this work will be found useful, and eery merchant who received Telegrams of im portance should obtain a copy, and insert in their places such proper names or unusual words as he may be likely to receive in his Telegrams, if he does not find them already printed.

An instance of not uncommon word-mutilation may be added to show the value of the book for the purpose above-mentioned. In a Telegram received, a word appears as “Sterturn.” The merchant goes through the usual course of looking through his Code for any word like this, which will make sense in connection with the remainder of the message, and after wasting an hour or more in trying to decipher the true meaning, is compelled to return the Telegram to the Telegraph Company for repetition.

Probably in the course of the following day he received the amended message, showing that the word originally despatched was “Overturn,” meaning “Sell-to-arrive 1,000 bales Tinnivelly Cotton at 5 3/4 pence per pound.” By this time, however, the London price has declined to 5 1/2p. per pound, so that he must either run the risk of holding the cotton in a falling market, or submit to an immediate loss of £300 on the previous day’s quotation. now had this merchant referred to this book under the letter N for words ending “erturn,” he would at once have found the word “Overturn,” and saved some hundreds of pounds.

We may explain that such an error as the above is not infrequently caused by incorrect reading of the “Morse” alphabet; the letters St being expressed in “Morse” by --- — and the letter V by ---—, the initial “O” was either lost or very likely attached to the end of the previous word.

Thousands of instances of errors and consequent heavy losses might be given, but no Merchant or Banker requires to be told of them, as they are of almost daily occurrence.

As a further assistance in deciphering badly transmitted messages, we append the Morse Alphabet, as used on almost every Telegraph wire throughout the world, and a list of the more common errors occurring in Telegrams.

nice article. I would love to follow you on twitter. By the way, did you learn that some chinese hacker had hacked twitter yesterday again.
[url=http://amazon.reviewazone.com/]Sandra[/url]