by Whitney
I had such high hopes for productivity today but, as usual, am getting distracted by beautiful images from books. Especially those damn little volvelles. I mean, it counts as research -- right?

I've been looking at the

by Martin Waldseemüller (1507). Waldseemüller, of course, is best known for his printed wall map, an incredible undertaking that attempted to chart all known cartographic information. It was also the first map to christen the New World "America" in Amerigo Vespucci's honor, since Vespucci's exploration helped Waldseemüller outline that big chunk of land across the ocean. 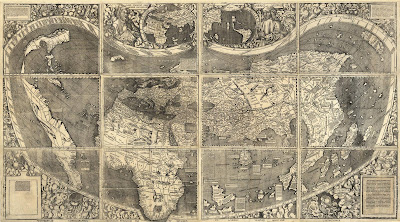 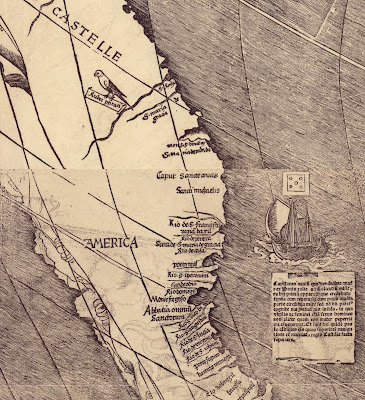 In addition to his map, he made a print designed to be cut into strips ("gores") that could be pasted onto a sphere to create a globe. The University of Minnesota owns a copy. 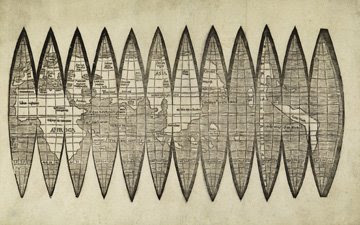 Isn't that fabulous? The America stuff is great -- but more interesting is Waldseemüller's treatment of space and medium, or rather his merging of space and medium as a wall map becomes a set of twelve pages, and a page becomes a site for cutting and pasting. Of course, printing gores to paste on a globe was not an uncommon practice, so I wouldn't say Waldseemüller was unique or inventive in this respect; and all maps have to deal with their medium to some extent. But this use is just so explicit, so self-conscious and (pun intended) clear-cut. Especially in light of the astronomical instrument he includes in his Cosmographiae Introductio, the book I've been looking at, which accompanies the maps. 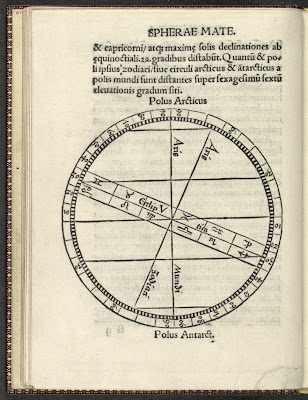 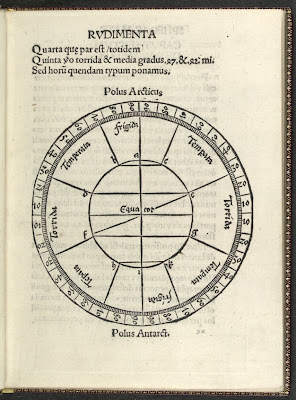 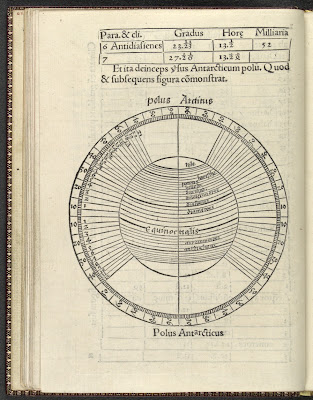 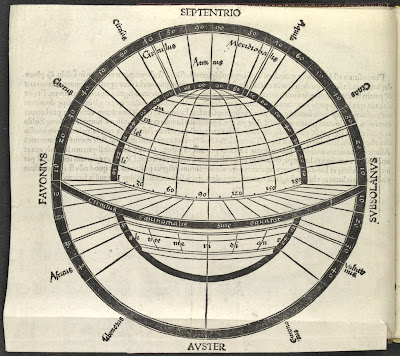 You're right, none of these are instruments, at least not as far as I can tell -- just some plain old circular diagrams of the earth circa 1507. Still neat though. Okay, this is the instrument I'm talking about: 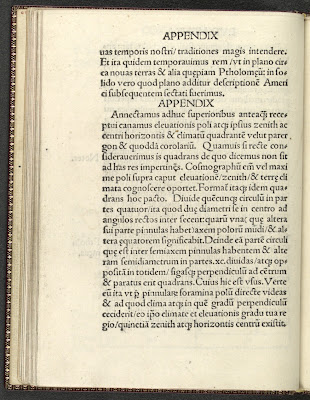 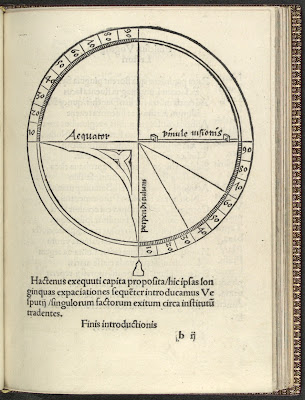 I've included the accompanying text, because you have to read it to understand what's going on. Here's a rough translation:

We will add to the previous, as an appendix or corollary, a quadrant, by which may be determined the elevation of the pole, that very zenith, the center of the horizon and the climates ... So, this quadrant is constructed in this way. Divide any circle into four parts so that the two diameters intersect themselves in the center at right angles: the one (which has as small point at either end) represents the axis of the of the poles of the world, and the other, the equator. Then you divide the part of the circle which is between the semi-axis having a point and the other semi-diameter in 90 parts, and the opposite part in the same number; [then] fix a perpendicular line to the center and your quandrant will be prepared. This is used as such. Turn it so that the you can see the pole directly through the point's openings and toward that climate and to which degree the perpendicular falls; the region and the zenith and center of your horizon falls in that climate and degree of elevation.

It's a measuring instrument! A make-your-own quadrant! One of many printed in books, with instructions for their use.

You really have to see the whole package -- wall map, globe and book -- to understand just how open and active these prints are, not simply inviting but requiring their owner to participate in their construction. One could even go so far as to say the world doesn't "exist" without its participants -- a claim which might seem a bit of a stretch, until you consider these maps in their cultural context. By necessity, they were collaborative ventures, cobbled together from various bits of knowledge brought back by explorers, astronomers or previous maps; and the amateur, the adventurer, played an important role. In other words, these printed maps couldn't be described as "closed" or "authorized," as is often said of the book. Rather, they used the form and affordances of print to invite participation, both in the small way of cutting out a quadrant, and the big way of contributing one's knowledge, skills and calculations to a task that allowed humans to peer across the oceans into distant lands.

The first step is putting a paper world together; then you make an instrument to go explore the real one.

(A facsimile of the entire Cosmographiae Introductio is available through the Library of Congress here. A reproduction is on Google Books.)
file under: books, instruments, maps, waldseemüller, woodcut