by Whitney
Hands are often found around volvelles in early printed books, usually in the form of "pointers." For example, a woodcut calendar from 1466 calculates the date of Easter, as well as the golden number of any given year, by spinning a set of nesting wheels against each other. The innermost disc shows the image of an angel pointing with hand and foot at the chosen number (Sherman 164-5, Cat. 41). Similarly, Giambattista della Porta's popular cryptography manual contains several decoder dials — volvelles used to decode encrypted texts mechanically — which feature God's pointing finger in the center, poised to decrypt the surrounding symbols (Schmidt online). 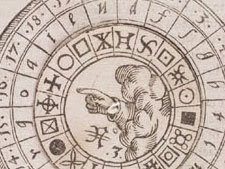 There is then a history of technology that is also the history of "man," the programmed/programming machine: the human written. The human cannot simply be returned to the divine/oral origin; the hand is there from the start, as the locus of retroactive redetermination. Thus, from the start, the written being and the writing being are coincident and differential, opening and enclosing at one and the same time interiority and exteriority, the human and the technological, the mind and the body, speech and writing in their narrow sense; from the start, the relationships between these and all other differential terms exist within the possibility of protention and retention and the differential possibilties of rhythms of emergence. (Goldberg 24)

In fact, in the visual culture of early modern books, the image of the hand often straddles the boundary between performance and product. Sign languages like George Dalgarno's A Manual Alphabet (1680) and John Bulwer's Chirologia or the Naturall Language of the Hand (1644) link gestures with the production of speech, treating hand motions as a form of universal language, while earlier finger-reckoning systems, such as Luca Pacioli's, use digits of bone and sinew to calculate digits of numerical abstraction. Finger alphabets also proliferated during the late sixteenth century, facilitating memory through the rehearsed gestures of individual letters and even, in Giambattista della Porta's cryptology manual De furtivis literarum notis (1563), encrypting texts through a gestural performance that links touched body parts to individual letters (see Sherman 186). 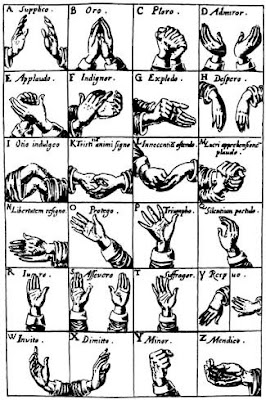 (From John Bulwer's Chirologia: or the naturall language of the hand, 1644.)

Even as the hand performs language, though, it is itself a surface for writing during the early modern period. In thoughtful and extensive exhibit on images of inscribed hands in early printed books, Claire Richter Sherman points to the many ways that marks on the hand operated as a form of memory palace, helping humans "to understand, order and recall abstract concepts" through "iconic metaphors, bodily mnemonics, and cognitive maps encompassing processes of association, memory, and recollection" (Sherman 13; see Cat. 56, 64). 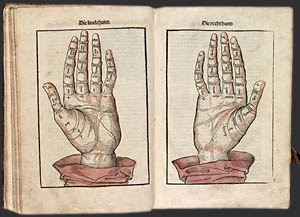 (From Stephan Fridolin's Schatzbehalter (1491); image from the State Library of Victoria.)

In Stephan Fridolin's Schatzbehalter (1491), a series of woodcuts by Michael Wohlgemut (Albrecht Dürer's instructor) depict the human hand as a database storing a set of 50 roman numerals, each value linking back to a meditation in the text. In addition to using the hand as a storage device, Fridolin encourages his readers to cut out large paper hands and tag them with keywords that will help the penitent call up associated text and images (see Sherman 66). Thus the hand becomes a technology of inscription that not only triggers the reader's memory, but actually forces the reader to compose her own texts through a meditative form of cut-ups and recombinations.

Manicules — the "pointing hands" that annotate the margins of so many books across the ages — also slide along the same sharp edge of performance and monument, motion and storage. As M. T. Clanchy points out, these hand-drawn symbols might be seen as a form of ars memorativa, "a simply way of facilitating the retrieval of information" (Clanchy 172). Yet, as Will Sherman argues, the manicule also "has a gestural function that extends beyond its straightforwardly indexical one" (Sherman 51). Operating within a dense network of inscription, the manicule originates in a moment of reading that becomes the act of writing a hand that points at, and thereby "stores," a slice of text. Like Harsdörffer’s Denckring, like Burroughs' cut-ups, the manicule forces us to ride the rim between reading and writing, between textual consumption and textual production. 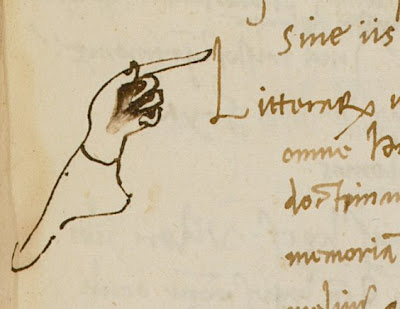 Oral and written are derivative, then, from the handedness of the human. As Raymond Williams says, there are "relationships embodied in writing." For Derrida, that is literally true; the writing being is also being written, whether at the instinctive level or while writing at the computer. In the relationship between writing in the general and in the specific sense — in relationships which are not merely at the order of conceptuality, but which are also social and historical — the field of a differential inscription of human being comes into view. (Goldberg 24) 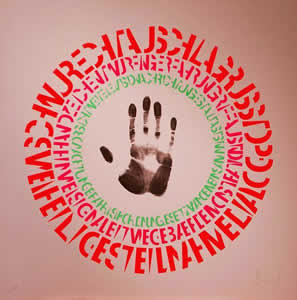