by Whitney
What a strange few weeks. I'm in that stage of writing where, every day, I swing manically between extreme confidence in my topic to utter disillusionment with the absurdity of the whole enterprise (by which I mean both "academia" and "life," the biggest absurdity of all).

I've been writing on cut-up methods of all kinds, starting with the Little Gidding "Harmonies" of the seventeenth century; then different commonplacing practices that involved cut-n-paste; touching a little on Jefferson's Life and Morals of Jesus of Nazareth constructed from sliced up Bibles; on to Tristan Tzara's famous hat trick of the 1920s, and later the cut-ups of Brion Gysin, William Burroughs, Ian Sommerville, &c. With some Quirinus Kuhlmann, Jackson Mac Low, G. W. Leibniz, Ulisse Aldrovandi, and, um . . . Dick Higgins, I think, thrown in for good measure. That kind of makes it sound like I'm following a linear progression, but I'm not; I write 150 words on a topic, then move onto the next, jumping around in time and space.

(By the way, I've been reading some interviews with Dick Higgins -- very bright guy. I'm impressed. I usually avoid interviews with artists I respect, because they tend to either over- or under-theorize their work. Burroughs is a great example: his work is interesting, but he sounds so damn dull and even grumpy in his later interviews. But Higgins . . . anyway, check him out, particularly in Nicholas Zurburgg's collection of interviews with avant-garde artists, Art, Performance, Media.)

Here's some of what I've been thinking about in regards to Jefferson's Bible as a cut-up practice, and form of ars combinatoria. I'll slowly post some more on Little Gidding and the dada cut-ups this week.

* * *
In a text-generating volvelle, space is a spiral, a nest, a knot. Spinning the wheel unrolls a series of combinations, much like the mesmerizing list of As, Cs, Ds and Gs produced by DNA sequencers. Yet the disc itself consumes only a small portion of the page, only a few inches square. By condensing the art of combination into an interlocking algorithm, volvelles produce the seemingly infinite from a condensed, finite space.

By contrast, the cut-up method dismembers the text. Hands crack back the book’s spine, ripping the sinews of binding; scissors slice the page and words fall, disfigured, from the text’s corpus. Unlike the tightly-wound spiral spinning imagined clouds of combinations, cut-ups expose the text’s spread to violence; they explode the thick brick of the book into ashen wisps of words.

* * *
Like the four hands floating around Harsdorffer’s Denckring – like manicles – like the reader’s hand spinning the discs – like the finger that points and clicks – the hand will cut up the hand that recombines. The coherent abstraction of a textual icon, dismembered from its body, reconnects through the process of an embodied hand acting, making motion, spinning a web of combinations. 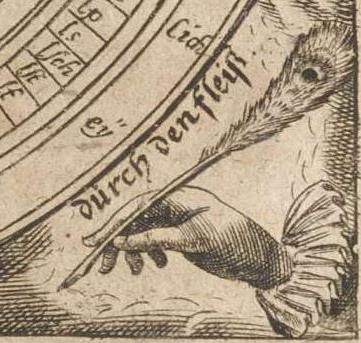 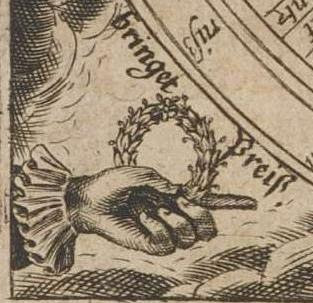 As William Burroughs wrote, cut-ups are experimental – "experimental in the sense of being something to do."

* * *
When Thomas Jefferson took scissors to his Bible in the Spring of 1804 – three years into his Presidency and less than twenty years after the federation of the United States of America – he was profoundly dissatisfied with corrupted state of the Christian religion. "In extracting the pure principles which [Jesus] taught," he later wrote to his friend John Adams, "we should have to strip off the artificial vestments in which they have been muffled by priests, who have travestied them into various forms, as instruments of riches and power to them."

We must reduce our volume to the simple evangelists, select, even from them, the very words only of Jesus, paring off the Amphibologisms into which they have been led by forgetting often, or not understanding, what had fallen from him, by giving their own misconceptions as his dicta, and expressing unintelligibly for others what they had not understood themselves. There will be found remaining the most sublime and benevolent code of morals which has ever been offered to man. I have performed this operation for my own use, by cutting verse by verse out of the printed book, and arranging, the matter which is evidently [Jesus’], and which is as easily distinguishable as diamonds in a dunghill. The result is an 8vo. of 46. pages of pure and unsophisticated doctrines, such as were professed and acted on by the unlettered apostles, the Apostolic fathers, and the Christians of the 1st. century. (Jefferson 352) 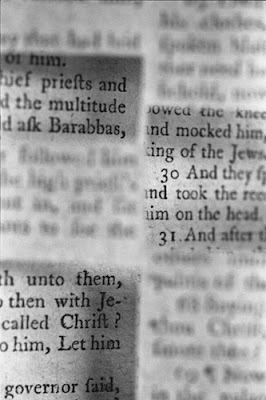 [Photo by Alexandria Searls, from "Jefferson and the Good Book," an exhibit available here.]
To purify the adulterated Word of God, Jefferson ordered two clean copies of the New Testament published in Dublin, then proceeded to dissect each corpus, extracting only those verses that spoke in the "true" voice of Jesus (Sheridan 27) – verses, as Jefferson put it, "as easily distinguishable as diamonds in a dunghill" (Jefferson 352). As he wrote, "the result is an 8vo. of 46. pages of pure and unsophisticated doctrines, such as were professed and acted on by the unlettered apostles, the Apostolic fathers, and the Christians of the 1st. century" (Jefferson 352).

Jefferson titled his work The Philosophy of Jesus of Nazareth, extracted from the account of his life and doctrines as given by Mathew, Mark, Luke, & John. being an abidgement of the New Testament for the use of the Indians unembarrassed with matters of fact or faith beyond the level of their comprehension.

* * *
Thomas Jefferson took his scissors to a set of Bibles for a second time around 1820, nearly seventeen years after completing The Philosophy of Jesus. The result was a multilingual reconstruction entitled The Life and Morals of Jesus of Nazareth Extracted textually from the Gospels in Greek, Latin, French & English.

Each spread in the book contains four columns, one for each language, and includes passages pertaining not only to Jesus' teachings (as with The Philosophy of Jesus) but also to his life. As Sheridan points out, whereas Jefferson cut up and recombined his first Bible "in response to his personal religious needs and his concern with the problem of maintaining social harmony in a republication nation," his second "was strictly a product of his private search for religious truth" (Sheridan 30). 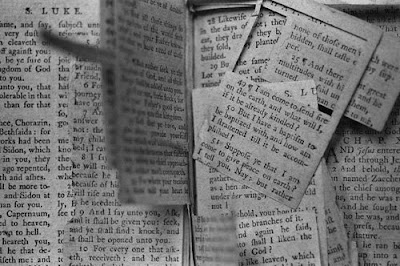 [Photo by Alexandria Searls, from "Jefferson and the Good Book," an exhibit available here.]

I have used the language of disfigurement and dissection to describe the cut-up method, as if the body of the book must remain an inviolable, unimpregnated closure of text. The cut-up, I have implied, is a kind of Frankenstein, a Golem, a Tower of Babel that sucks life from its elements as soon as their attacker dislocates and recombines them into something frighteningly, unnaturally new. Yet it is clear that Jefferson and the women of Little Gidding saw their scissors as swords of peace, not pillage. His cut-ups did not, he thought, disfigure the Word but clipped away the blemishes that accumulated, plucked diamonds from the dung. In short, the selective recombination of the old gave birth to a primary, not secondary, text – a New Son brought to wash the Wor(l)d of its sins.

* * *
For Jefferson, this new text was, in the words of William Burroughs, a poetry "for everyone!"
file under: bible, cut-up method, dada, thesis, thomas jefferson, tristan tzara, william s. burroughs

Unlike cut-up practice, Harsdorffer’s Denckring doesn't recombine "words", but the syllabic components of words. No?

I can see how cut-up practice might involve violence to "the book," or at least to some frozen (because codexified!) arrangement of utterances/stories, but I don't get that sense from the text-generating volvelle you're described. It's just rearranging letters -- and thereby strikes me as coming closer to a cryptological practice than a poetic one.

How is cut-up practice different from any kind of recombination of sentences or phrases from a corpus/corpora, say, to create an OED or a telegraphic code dictionary or a concordance to the bible or an author's corpus? Different rules governing the recombination, I suppose. But they're all forms of cut-up.

Thanks for bringing these "harmonies" into view.

cut-up practice -- a form of "hacking" the book. sometimes finds or looks for harmonies, others, not.

John -- You're right about Harsdorffer's Denckring; it combines letters/syllables. I've been walking along the rim of this thought for two weeks now and agree that there's something fundamentally different between cut-ups and text-generating volvelles. There's a connection between a material interest in language, though, which is shared by Harsdorffer and his 17c contemporaries. More on that soon...

Have been having problems synching the iphone 3G after I previously synched it with my PC's itunes. The error always says (not in verbatim) 'you are not authorized to do this'. My iphone and itunes are all in their most recently released versions. It's really just the synching that's a problem - help please!