by Whitney
This weekend, I headed back into Ramon Llull territory, tracing how our thirteenth-century Catalan monk's Ars magna migrated into the Renaissance. In my travels, I revisited Frances Yates' The Art of Memory, and found a few interesting claims I hadn't noticed before about visual alphabets in sixteenth-century manuals on the art of memory. For instance, Johannes Romberch's Congestorium Artificiose Memorie (1533) contains several visual alphabets, pictured in Yates' book, including an insanely awesome set devised from human tools and technologies: 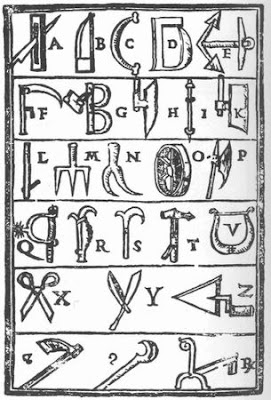 Visual alphabets are ways of representing letters of the alphabet by images. These are formed in various ways; for example with pictures of objects whose shape resemble letters of the alphabet, as compasses or a ladder for A; or a hoe for N. Another way is through pictures of animals or birds arranged in the order of the first leter of their names, as A for Anser, goose, B for Bubo, owl. Visual alphabets are very common in the memory treatises and they almost certainly come out of an old tradition. ...The visual alphabet probably comes out of endeavours to understand [the classical memory treatise] Ad Herennium on how proficients in artificial memory write in images in their memories. According to the general principles of artificial memory we should put everything that we want to fix in memory into an image. Applied to the letters of the alphabet, this would mean that they are better remembered if put into images. The notion as worked out in the visual alphabets is of infantile simplicity, like teaching a child to remember C through the picture of a Cat. Rossellius, apparently in perfect seriousness, suggests that we should remember the word AER through the images of an Ass, an Elephant, and a Rhinoceros! (Yates 118-9)

[W]hilst new influences are making themselves felt, there is at the same time a deterioration going on in the memory tradition. The memory rules become more and more detailed; alphabetical lists and visual alphabets encourage trivial elaborations. Memory, one often feels in reading the treatises, has degenerated into a kind of cross-word puzzle to beguile the long hours in the cloister; much of their advice can have had no practical utility; letters and images are turning into childish games. (Yates 123)

Hmm. I also happily happened to be reading Patricia Crain's The Story of A (2000) this weekend, which traces how the "verbal and visual figuration of the alphabet in the seventeenth, eighteenth, and nineteenth centuries, in ABC books and primer, as in novels, had extended the letters and installed them as participants in the doings of everyday life, as players within and even generators of social and intimate life" (Crain 217). Crucial to Crain's argument is the idea that the alphabet renders itself natural in literary life, so that it now seems to be (to go back to Yates) a "childish game" of "infantile simplicity," even though it's a fundamentally "unnatural" system of categorization. The letters you're reading right now aren't wholly phonetic; nor do their forms link meaningfully to their semantic content. We think of them as simple forms, in part because of the institutionalizing forces that Crain identifies throughout her book, but in fact they're almost frighteningly arbitrary, as so, so, so many early modern thinkers knew, from Justus Schottel and his crazy baroque Stammwörter theory, to John Wilkins's philosophical language. As many also knew -- and this is the basis of all artifical memory systems Yates examines -- arbitrary signifiers are harder to memorize. Link A to an Ass and E to an Elephant, though, and suddenly otherwise (seemingly) free-floating forms latch onto something in the world.

In short, Yates' confusion over visual alphabets quote quite wonderfully illustrates Crain's point exactly: that we have in some sense become blind to the strangeness of the alphabet. But in fact not all people at all times have experienced letters as the natural or inevitable carriers of written language. This seems to be the missing links in Yates that encourages her (wrongly, I think) to read visual alphabets as a kind of "trivial elaboration."

Johanna Drucker's Alphabetic Labyrinth also has much to say on this topic; but if I go on any longer, this post itself will become a trivial elaboration. In any case, visual alphabets are mentioned in passing a lot; but there's more there than meets the eye.
file under: alphabet, ars memorandi

I, too, love alphabets of all kinds--I'm presenting on 18c battledores (alphabets+reading instruction as a handy souvenir!) at SHARP this summer-- so appreciate the reference to Romberch. Have you read Brian Gotman on the alphabet and the invention of God?

Oops, meant ROTMAN not Gotman on the last.