Acts of Translation: Digital Humanities and the Archive Interface

by Whitney
I'm finishing up a paper with my friend and colleague Madeleine Clare Elish*: "Acts of Translation: Digital Humanities and the Archive Interface." We'll be presenting it in about at week at the conference Media in Transition 6: Stone and Papyrus, Storage and Transmission. Here's a little taste from our latest draft:

From the successes of Project Bamboo to the formation of an Office for Digital Humanities at the National Endowment for the Humanities, myriad institutions, scholars and technologists have recently come together to develop standards for collaborating in digital spaces across the humanities. Indeed, this shared commitment across multiple disciplines has led many to describe Digital Humanities as a discipline in its own right, encompassing aspects of the library sciences, computer sciences and, of course, the humanities.

Notably underrepresented within the field are the standards and practices of visual design. As Johanna Drucker has observed, "many of the digital humanists I’ve encountered treat graphic design as a kind of accessorizing exercise, a dressing-up of information for public presentation after the real work of analysis has been put into the content model, data structure, or processing algorithm" (Drucker online). Drucker traces this attitude to the "long-standing tensions between images and text-based forms of knowledge production" within Western philosophy (Drucker) – a tension iterated in the concept of code and platform as mere containers for, rather than co-producers of, meaning. On a practical level, these boundaries are inscribed onto a division of labor between humanists – "scholars" who produce intellectual content but have few, if any, programming skills – and technologists who encode content without, it is presumed, participating in its production. Although most developers have some training in visual design, their skills are often subordinate to the scholar’s desired functionalities.

We go on to argue for the value of visual design in Digital Humanities:

Through convention, the user "drags" and "drops" items in a list, or "expands" and "collapses" browsing facets to "traverse" metadata, conceptualizing haptic movement to construct a narrative around underlying data structure. ... More than simply organizing materials on a screen, then, visual design negotiates a constant exchange of meaning between the grammar of HCI and the database or markup language. These mediations -- what we are calling acts of translation -- both open and foreclose interpretive possibilities, influencing the way scholars and students relate to the materials they study.

We explore these acts of translation in three case studies: NINES, the CHNM's Object of History, and SFMOMA's ArtScope.

Some of the more interesting empirical evidence we came across during our research didn't make it into the paper . . . like the fact that much-lauded 2006 ACLS report Our Cultural Commonwealth didn't include any prominent programmers or designers on its commission or among its commission advisors; nor does it address technologists as one of its many audiences, although the report -- basically on the state of digitizing cultural heritage artifacts -- clearly relates to the concerns of those that design and produce digital technologies. Certainly an enormous amount of good and even amazing things have come out of that report; but the absence perhaps speaks to the systemic division of labor that is still, still present in most DH labs and projects.

In the same vein, there are an astonishing number of practically unnavigable DH projects. The Rossetti Archive comes to mind. Imagine I want to get to Rossetti's Ballads and Sonnets (1881). It takes me at least four (really, five) clicks and three long pages of text to get to the object itself, following the confusing path Books Exhibit --> Collections Intro --> Browse Collection --> Document --> IMAGES --> Transcript (see the top of the image below). Once I get to facsimiles I want, the images are simply lined down the center of the screen, difficult to browse. 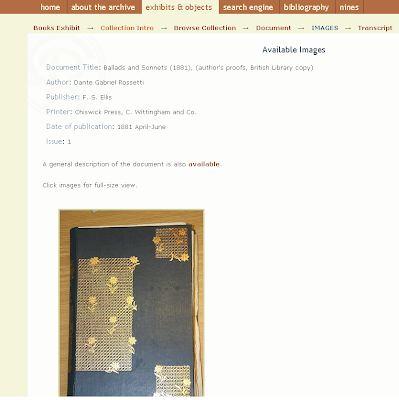 These difficult-to-traverse page hierarchies hide all the juicy stuff -- the images -- while the archive's organizational structures are opaque and hard to traverse. For instance, alphabetic lists work pretty well in a library; not so much on the web.

The Rossetti Archive has been an amazing, inspiring project, one of the first I used and studied as a student of Digital Humanities. It goes without saying that Jerome McGann and the staff on the project are pioneers in the field -- hell, we might not have a field of DH without them. But it's worth taking a step back and considering it and all DH projects not as a scholar editing and compiling artifacts and metadata, but as a user trying to find them. It forms a very different picture.

From my experience in a DH lab, the typical workflow for most projects is: gather and analysis the data you want to present; figure out what you want to emphasize within that data set; lay out the functionalities the user can perform on that data; and, finally, design the interface. From a visual design perspective, this is all backwards -- first you figure out themes, your Big Picture, your story you want to tell with the visual interface; then you bring the actual data into the picture. Of course, this approach is very different from the scholarly research process in the humanities -- but then it has to be different. We're dealing with a different production medium.

None of the above has made it into my paper with Madeleine, but it's been bouncing around the back of my skull as we pass drafts back and forth. If a technologically competent scholar willing and able to use DH projects gets frustrated with the interface designs, how can we expect to entice others, especially non-scholars and those who couldn't otherwise access these materials?

* Madeleine has been a brilliant collaborator, contributing immensely to my own thinking on this and so many topics. If I say anything interesting about Digital Humanities in the next few weeks, she deserves co-authorship. Without her, I'd still be sputtering on about my little literary wheel machines, not knowing a thing about visual design. As in: whut, colors and shapes and pretty things make people do stuff online?

** We're obviously not the first to make this point. Johanna Drucker and Matthew Kirschenbaum have both talked about the importance of interface design in DH, and Lev Manovich was an early and important figure in the field.