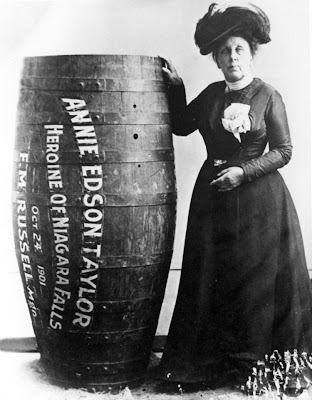 Mrs. Annie Taylor, a 63-year-old schoolteacher, decided that a trip over Niagara Falls was her way to fame and fortune. On October 24, 1901, assistants strapped her (along with her cat ... ) into a special harness in a barrel. A small boat towed the barrel out into the main stream of the Niagara River and the barrel was cast loose. The rapids first slammed it one way, then the other, then came the drop and a bone-wrenching jar so violent that Mrs. Taylor was sure she hit rocks. Seventeen minutes after the plunge, the barrel had been tossed close enough to the Canadian shore to be hooked and dragged onto the rocks. // source 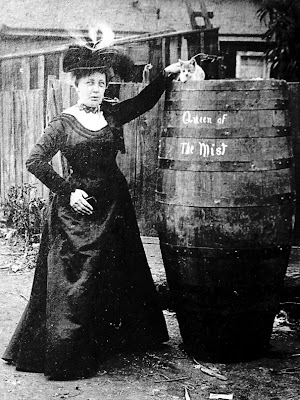 The trip itself took less than twenty minutes, but it was some time before the barrel was actually opened.

After the journey, Annie stated to the press:

If it was with my dying breath, I would caution anyone against attempting the feat... I would sooner walk up to the mouth of a cannon, knowing it was going to blow me to pieces than make another trip over the Fall.

She briefly earned money speaking about her experience, but was never able to build substantial wealth. Soon after the plunge, Annie's manager decamped with her barrel, and most of her savings were used towards private detectives hired to trace the barrel (it was eventually found in Chicago, only to permanently disappear some time later). She spent her final years posing for photographs with tourists at her souvenir stand, attempting to gain financial support from the New York Stock Exchange, briefly talking about taking a second plunge over the cataracts in 1906, attempting to write a novel, re-constructing her 1901 plunge on film (which was never seen), working as a clairvoyant, and providing magnetic therapeutic treatments to local residents. // source 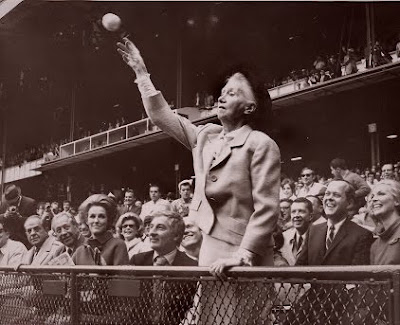 Fanaticism? No. Writing is exciting
and baseball is like writing.
You can never tell with either
how it will go
or what you will do
// Marianne Moore, source 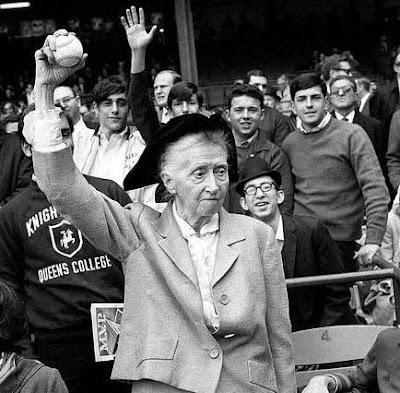 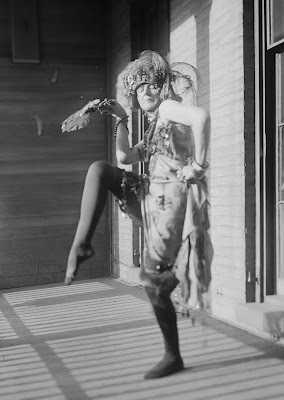 "She's not a futurist," said Marcel Duchamp of Elsa. "She is the future."

The enigmatic artist known as the Baroness Elsa von Freytag-Loringhoven (1874-1927), a friend and collaborator of Duchamp, Man Ray and Djuna Barnes, is considered by art historians to be the first New York Dadaist. She made sculpture, wrote avant-garde poetry and made controversial, sexually charged street theater.

Elsa was a consummate self-costumer, as is evident from surviving photographs that show her wearing such adornments as a tomato soup can bra, teaspoon earrings, black lipstick and a birdcage hat containing a live canary. Elsa's "art-found-objects" were dangerously anti-religious -- a plumbing trap titled God (1917), a bit of splintered shingle called Cathedral (1918). Her sound and visual poetry were far more daring than those of her male counterparts of the time.
// Valery Oisteanu, "The Dada Baroness," source 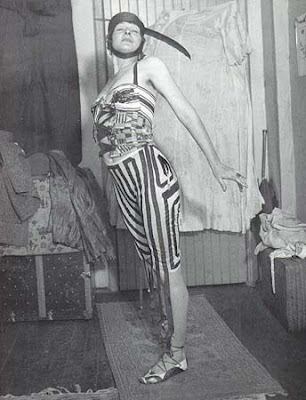