by Whitney
Being at a new institution -- especially one at once so similar to and radically different from other institutions I've been at -- I've been thinking a lot about our scholarship verbs: what it is to do, to be a scholar. There's something deeply dissatisfying about them both; for I don't "do" anything to scholarship (if anything, my days are defined by a lack of doing -- I sit, I look, I read, I think; my legs cramp up, my eyes glaze over -- I'm inactive), and one doesn't simply be scholarly (this seems odd to me; as if I can just will myself into the role). The word that keeps coming to mind is perform.

Isn't that just what it is? A performance?

Perform is a strange word. It's rooted in the Old French parfornir, "to do, carry out, finish, accomplish" -- par- implying completeness, -fornir meaning to furnish, as in to bring something to its wholeness, its finish. (Here's the entire etymology from the OED, if you're interested:

parfourmer, parfourmir, parfurmer, performer, performir, perfourmer, parforner, parfourner, parfurner, perforner, perfourner, perfournir, Anglo-Norman and Middle French parfornir, parfournir, parfurnir (French parfournir, now only in legal use in sense ‘to contribute (something) in addition to or as a replacement for (something else)’) to carry out, execute (an action, a promise) (c1170 or earlier in Anglo-Norman; frequently in legal use with object ‘will’, ‘judgement’, or similar (1291 or earlier)), to achieve, complete, finish (an action, also a concrete piece of work, e.g. a song, a building) (c1300 or earlier in Old French (Picardy)), to make, provide (payments, etc.) (14th cent. or earlier), to act (a play) (15th cent. or earlier), to supply (what is wanting) (late 14th cent. or earlier) < par-, per- (see

Yet in an ordinary sense, wholeness or completeness has nothing to do with performance. To perform is to assume roles, to conjure material bits of reality into some kind of wholeness (here is the trace of completeness, accomplishment) but, in my mind, always ad hoc. That isn't to say a performance can't be planned; it just operates best within a space of spontaneity and improvisation rather than rehearsal and memorization. It's in this sense that I can see what I spend the majority of my time doing as a kind of performance -- performing reading, performing writing, performing intelligence (which, importantly, is not the same thing as feigning or distrusting or proving intelligence); performing professionalism, performing relationships, performing interest; performing performance.

I'm taking a Frederic Jameson's course on Nietzsche this semester. Looking up the etymology of "performance," I can't help but think of Zarathustra's anecdote of the tightrope walker, the consummate Übermensch:

The tightrope walker had begun his performance: he had stepped out of a small door and was walking over the rope, stretched between two towers and suspended over the market place and the people. When he had reached the exact middle of his course the small door opened once more and a fellow in motley clothes, looking like a jester, jumped out and followed the first one with quick steps.

"Forward, lamefoot!"he shouted in an awe-inspiring voice. "Forward, lazybones, smuggler, pale-face, or I shall tickle you with my heel! What are you doing here betwen towers? The tower is where you belong. You ought to be locked up; you block the way for one better than yourself." And with every word he came closer and closer; but when he was but one step behind, the dreadful thing happened which made every mouth dumb and every eye rigid: he uttered a devilish cry and jumped over the man who stood in his way. This man, however, seeing his rival win, lost his head and the rope, tossed away his pole, and plunged into the depth even faster, a whirlpool of arms and legs. The market place became as a sea when a tempest pierces it: the people rushed apart and over one another, especially at the place where the body must hit the ground. 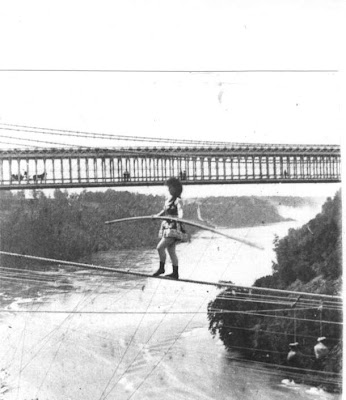 [Maria Spelterini crossing Niagara Falls on a tightrope, 1876. Spelterini is the first and, to my knowledge, only woman to cross the Niagara on a tightrope. More images here.]
For a tightrope walker, performance (or the ability to perform) exists in her position, in placing her center of gravity directly over her ankles for support.

And, perhaps more importantly, in forgetting the abyss of whooshing water open beneath her.
file under: nietzsche, scholarship, tightrope

Good post.
The performance metaphor works well for design, too. In that field in which I dabble, there's a twist: one labors to cover one's tracks, make it look magic. Those who "know" what's not shown — scaffolding-like mechanicals and comps, in the old days, style sheets and xml in the new — are moved by the disappearing act.

There's a connection here with Castiglione's discussion (ca 1528) of sprezzatura — that offhandedness or nonchalance, that art that hides its art, that is required of the courtier, to make the difficult look easy and thereby add to one's personal vertu.

yes, i was searching for but unable to locate sprezzatura in my passive memory! thanks.

As Xrumer experts, we have been using [url=http://www.xrumer-seo.com]Xrumer[/url] fitted a long fix now and know how to harness the massive power of Xrumer and adapt it into a Cash machine.

We also yield the cheapest prices on the market. Assorted competitors see fit order 2x or temperate 3x and a lot of the continuously 5x what we debt you. But we believe in providing great help at a tearful affordable rate. The unbroken something of purchasing Xrumer blasts is because it is a cheaper substitute to buying Xrumer. So we focusing to abide by that thought in mind and yield you with the cheapest rate possible.

Not only do we take the most successfully prices but our turnaround in the good old days b simultaneously for your Xrumer posting is wonderful fast. We drive take your posting done in the forefront you discern it.

We also outfit you with a sated log of well-heeled posts on manifold forums. So that you can catch a glimpse of seeking yourself the power of Xrumer and how we have harnessed it to gain your site.[/b]

Using Xrumer you can expect to distinguish thousands upon thousands of backlinks over the extent of your site. Scads of the forums that your Site you intent be posted on bear high PageRank. Having your link on these sites can categorically serve strengthen up some cover rank back links and genuinely boost your Alexa Rating and Google PageRank rating through the roof.

This is making your position more and more popular. And with this inflate in celebrity as grammatically as PageRank you can think to see your milieu absolutely filthy high-pitched in those Search Engine Results.
Transport

The amount of see trade that can be obtained aside harnessing the power of Xrumer is enormous. You are publishing your locality to tens of thousands of forums. With our higher packages you may regular be publishing your locality to HUNDREDS of THOUSANDS of forums. Create 1 post on a all the rage forum will by enter 1000 or so views, with announce ' 100 of those people visiting your site. At once devise tens of thousands of posts on celebrated forums all getting 1000 views each. Your freight will go at the end of one's tether with the roof.

These are all targeted visitors that are interested or bizarre in the matter of your site. Envision how many sales or leads you can execute with this great gang of targeted visitors. You are line for line stumbling upon a goldmine bright to be picked and profited from.