by Whitney
As I mentioned a few days ago, my colleague Pete Moore and I are working on a digital re-reading of Langston Hughes' "The Negro Speaks of Rivers." I think it's getting pretty swank.

Each of the lines of text on the left is clipped from a scan of a different edition of Hughes' poem, from the original two-column layout published in The Crisis (1921) to contemporary anthologized texts that, quite frankly, look bland by comparison. (Surprisingly, while collating the different versions Pete discovered just how much the lineation and even punctuation varies in this canonical poem -- a point that nicely validates our emphasis on the material appearance of the lines.) On the right, a set of linked poems, critical interpretations, images, songs and videos form a constellation of responses to Hughes, both contextualizing and re-situating his work. Together, the call and its responses operate as a kind of detourned archive.

Yet the project itself does creative work as an artistic re-imagining of the poem. The design does this most explicitly. Centered visually on the metaphor of the railway time table or train table, the lines of Hughes' poem become the "Arrivals," coming in from all different decades, while the responses become "Departures" that feed back into the interpretation of the poem. (Design note: each of the lines flips interactively, like an old-school train schedule -- a beckoning call to riders, waiting to depart. Also, Hughes came up with the idea of the poem while riding a train.) What's so great about this metaphor is that it spatializes the linear, temporal model of time and, by extension, of call and response. As an interactive field of flipping clips (each line appearing one at a time), the space of the screen performs the time-based experience of reading and responding to the poem. Criticism, then, becomes an improvisational intervention into this noisy, expressive field.

The design took some time to gel, and went through several iterations. At first, we were thinking about doing one-line arrivals that would open into one-line departures, that would slide back into an arrival, unfolding a kind of accordion on the screen: 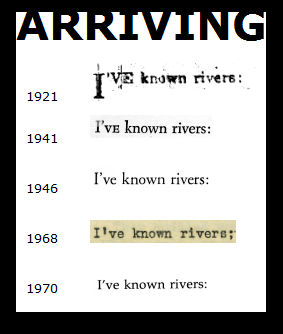 As much as I loved seeing each clip side-by-side (and the snazzy hover-over flip that would twirl them all at once -- so satisfying...), it didn't seem to make a lot of sense. So we started thinking more seriously about the two-panel design in the images above. Ever since my only quasi-successful experiment in two-panel design for my thesis, I've been hesistant to use them; but it seems to work here. Instead of expanding infinitely, the poem and its departures are contained in a space, much as a real train timetable is. The image in the background (of the Eads Bridge) sets it sailing.

Is it art? Is it criticism? Don't know. And don't care. It was fun, and I think it speaks. It calls; I want to respond.

I'll post a live link once I've got it completed and debugged.
file under: digital, digital literature, langston hughes, poetry