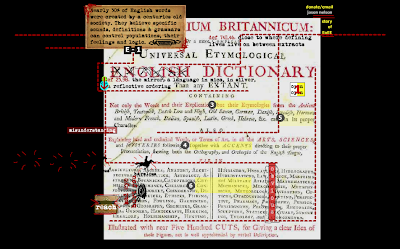 A new digital / Flash / game / poem from Jason Nelson, "Evidence of Everything Exploding." With dada art and dictionaries, it's like it was made for me.

Also, "respiratory system -- resuscitator," a tale from Webster's by John Shea. Not digital, but definitely dictionary-inspired.

I've also been sleeping with Sleeping With the Dictionary, a collection of Stein-ian poems by Harryette Mullen, passed along by my colleague Pete Moore. We're working together on a train/Trane-inspired digital remix of Langston Hughes' "The Negro Speaks of Rivers" that centers on the call and response of later poets. It's pretty awesome. More on that soon.
file under: digital literature, poetry