Digital Shakespeares and the Decay of Linklists

Most fascinating for me has been sifting through the layers of decaying dead petals that have fallen from these big, bloated blooms. In a way radically different from books, a linklist can persist long past the time the sources that gave it meaning have crumbled, leaving brittle, empty husks strewn over cyberspace. So often these websites are removed forcibly as the late-90s "free" (read: ad-riddled) webhosting services -- places like AOL Hometown and GeoCities, names evoking physical locations -- shut their doors, leaving thousands if not millions of ghost pages indexed for search engines. 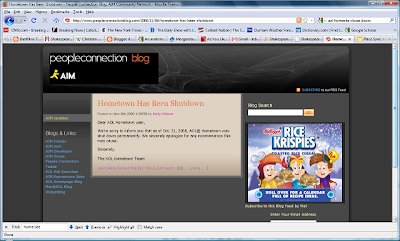 A disproportionate number of Shakespeare sites seem to be hosted on these types of servers, probably because they were put together by public school teachers or amateur Shakespeare enthusiasts who don't have access to other free forms of webhosting (like university servers). Those that haven't gone the way of the dodo are peppered with Google Adwords and banners, to the point that I very much suspect profit, rather than unadulterated love of the Bard, was the webmaster's primary motive. 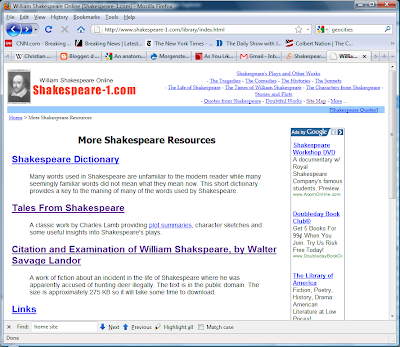 Among the pages that persist, many are produced by university professors or librarians in a fit of inspiration, then sit dormant. These are my favorites. Like little time capsules, a slice into the mountain of time, they serve as small archaeologies of the cutting-edge circa 200-whatever. Take, for instance, this site designed by Professor James Hunter of Edgewood College for his Spring 2005 course: 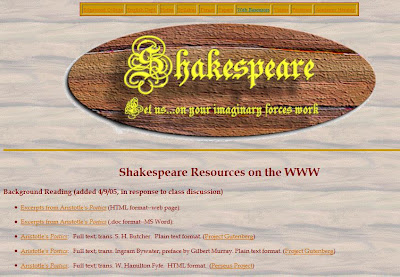 Now, I happen to think this site is amazing, both for its content (if you ever need to develop a Shakespeare course, here it is in its entirety!) and its delightfully kitsch design (woodgrain ovals! who knew!). And, although there are quite a few dead links, most of them are still kicking, but haven't been updated since 2005; certainly nothing born after mid-2005 is linked. Here's a case where links still live but stagnate, age, decline in relevance without, in fact, anyone doing anything.

Can there be any stronger argument for the live-ness, the ecology of media forms? We don't approach texts or objects in vacuums, but from a particular stance situated within a culture-soaked time. As becomes clear online -- clearer than with books, at least -- mediations of Shakespeare need do nothing whatsoever for their value, meaning, reference and relevance to radically change.
file under: digital humanities, links, shakespeare