by Whitney
Wittgenstein isn't the first thinker that comes to mind when you read Burroughs. In fact, Burroughs' fiction (which shows an unfortunate penchant for the phrase "rectal mucus") would probably disgust and horrify the culturally conservative Austrian. Yet I keep finding uncanny similarities between the two. 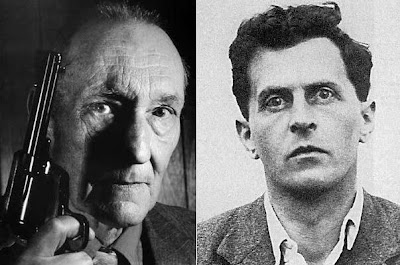 It begins with the obvious biographical details. Both had a wealthy upbringing in a prominent "new money" family (his grandfather's adding machine fortune for Burroughs, iron and steel money for Wittgenstein); both enlisted in the army, but were disillusioned by military life; both pursued ongoing homosexual attachments and chose to expatriate for most of their lives. Burroughs and Wittgenstein also share an uncomfortable relationship within their respective disciplines and with academia in general, skitting around the periphery of university culture. Not surprisingly, both are often deeply misunderstood by their critics, even today.
Most interesting to me, though, is their shared methodology. I've often discussed Burroughs' cut-up writing here -- the process by which he literally slices up and rearranges bits of writing from his Word Hoard, a trunk of manuscripts. In the cut-ups, Burroughs and his collaborator Brion Gysin masterfully manipulate a text's physical materiality (the paper) to achieve a much more emergent, literary materiality that foreshadows that of combinatory digital literature and poetry. (I even devoted an entire section of my thesis, whose design consciously mimics the "four square" cut-ups of Brion Gysin and Burroughs, on cut-ups. It's a bit of a distraction to my argument, but was fun to write.) What I've never mentioned is Wittgenstein's cut-up method:

Wittgenstein had a peculiarly laborious method of editing his work. He began by writing remarks into small notebooks. he then selected what he considered to be the best of these remarks and wrote them out, perhaps in a different order, into large manuscript volumes. From these he made a further selection, which he dictated to a typist. The resultant typescript was then used as the basis for a further selection, sometimes by cutting it up and rearranging it -- and then the whole process was started again.
// Ray Monk, Ludwig Wittgenstein: The Duty of Genius, p. 319 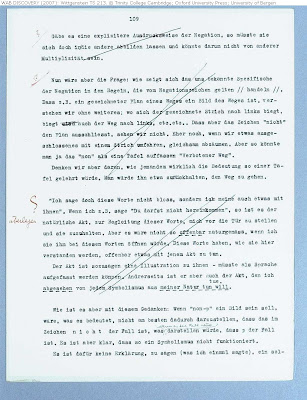 [Page 109 from what is known as the "Big Typescript," a dictated, typewritten selection of cuttings which were then further marked up by LW. At times, the symbols are, if this discussion is any indication, unclear. Wittgenstein was burned by mistaken symbols earlier in his career when the first printed edition of the Tractatus didn't replace the typewritten stand-ins for actual logical symbols.]
This physical engagement with the text as an object to be manipulated mirrors the fundamentally combinatory nature of his later methodology. As he wrote of his approach to doing philosophy,

I can set out this law in an hypothesis of evolution, or again, in analogy with the schema of a plant I can give it the schema of a religious ceremony, but I can also do it just by arranging the factual material so that we can easily pass from one part to another and have a clear view of it -- showing it in a perspicuous way.
For us the conception of a perspicuous presentation is fundamental. It indicates the form in which we write of things, the way in which we see things. (A kind of Weltanschauung that seems to be typical of our time. Spengler.)
This perspicuous presentation makes possible that understanding which consists just in the fact that we "see the connections".
// Wittgenstein, quoted in Monk, p. 311

[Two of Wittgenstein's cuttings, used to shuffle the order of his sections. All of LW's manuscripts, including his cuttings, are available in a digital facsimile edition (the Bergen Facsimile Edition) online.]
In other words, don't describe but show, or even do. Only by distilling his or her work into a series of examples and thought experiments to be mentally manipulated by the reader can the philosopher impart lasting wisdom -- a belief neatly paralleled by Wittgenstein's own combinatory writing habits.
As with the cut-up novels of Burroughs, this active, reader-dependent approach produces notoriously recondite writing. At times the Philosophical Investigations seems little more than strings of opaque examples marked by a near absence of philosophizing, a refusal to state a thesis or outline an argument; and, like The Ticket That Exploded or Nova Express, the presence of multiple voices, narrators and interlocutors makes it difficult to pin down what Wittgenstein "really" thinks. (He also shares this with Kierkegaard, another favorite of mine.) 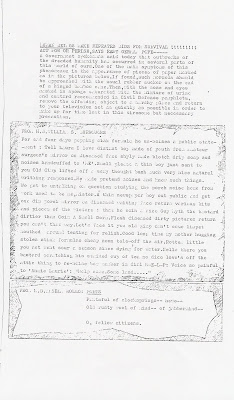 [A page of Burroughs' cut-up work. From here.]
On the one hand, the complexity and confusion of this style of writing seems at odds with Wittgenstein's most famous statements on philosophical methodology -- namely, that clarity is key, and "whereof one cannot speak, thereof one must be silent" -- but for him, as for Burroughs, the method is the clarifying, cohering factor in his work. Which is to say: if you're looking for a system, a set of summarizable theses, it simply is the methodology. Don't say; do. If you're confused about a term, act out its language game; envision the forms of life it engages, perform a thought experiment. Once this lifts the fog, well, then you zip your lip, cap your pen, and go do something more useful.

Cut ups are for everyone. Any body can make cut ups. It is experimental in the sense of being something to do. Right here write now. Not something to talk and argue about. Greek philosophers assumed logically that an object twice as heavy as another object would fall twice as fast. It did not occur to them to push the two objects off the table and see how they fall. Cut the words and see how they fall.
// Burroughs, "The Cut Up Method"

This is a statement Wittgenstein would, I think, be deeply sympathetic with.
Of course, Burroughs' cut-up novels are deeply engaged with this process of experimentation, often cycling through the same few anecdotes while shuffling the characters and settings. How many times does a character in The Ticket That Exploded enter an alien land, meet an alien guard, then experience some kind of linguistic isolation that can only be reconciled through physical contact with the "other," the foreign being? As with the Philosophical Investigations, the reader can enter and exit Burroughs' fiction at any point, because understanding does not emerge through linear narration; rather, the world of the novel presents a series of thought experiments that, together, produce an image of how the world works -- the forces that are occluding clear thinking, and methods for clearing the fog.
While I haven't found any indication that Burroughs read Wittgenstein extensively, he does cite the Tractatus in a sorely neglected but important passage from Ticket:

Wittgenstein said: "No proposition can contain itself as an argument" = The only thing not prerecorded in a prerecorded universe is the prerecording itself which is to say any recording that contains a random factor.
// Burroughs, The Ticket That Exploded, p. 166

Unwittingly -- and in one enigmatic sentence worthy of the Philosophical Investigations -- Burroughs takes the Tractatus and moves it into the realm of Wittgenstein's later thinking.
There's more to be explored here on the similarity between their philosophies of language; but I'll save it for another post. Until then, I'm capping my pen.
file under: cut-up method, philosophy, william s. burroughs, wittgenstein

Hi there, I found your blog via Google while searching for first aid for a heart attack and your post looks very interesting for me.

Thanks for this post. I find the manipulation of the physical materiality of text particularly fascinating. Can a comparison being made with Barthe's "writing about the sheer materiality of writing" as a means of challenging the traditional, referential mode of meaning?
(I've read recently "The Inkable Roland Barthes" by Neil Badmington).

yes! interesting connection. I haven't read the Badmington, but am adding it to my to-read list. While Wittgenstein isn't writing about the materiality of writing per se, the significance of his methods seem to come out in precisely the way you're identifying.

Turned my partner Kate onto your blog. You get a mention in one of her recent posts. Her blog is divine madness. Check it out: http://francesfarmerismysister.blogspot.com/2010/01/anorexic-text-consciousness-is-surface.html