the accretion of minute elements of signification

by Whitney
Checked to see if Duke Libraries has Umberto Eco's latest, The Infinity of Lists; was, appropriately, directed to the Direct support and general support maintenance manual including repair parts and special tools list, a US Army technical manual. 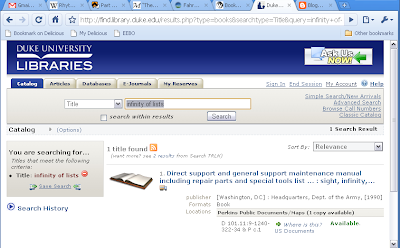 Lately my own life has tended toward the cohesive fragmentation of an infinite list. Not surprising, since it's the beginning of a new semester, in which I'll be exploring everything from female sovereignty in the Renaissance to gothic fiction in the rise and history of the novel, with a little bit of "experimental" literature thrown in for fun. Yes, it's a very English kind of semester -- my first in over two years. I'm treating it as a test. I want to see if still stand (handle, take, suffer) my own chosen discipline.

The accretion of minute elements of signification into crowds, arrays, and clusters allows a reverberation of these cultural particles between them and together, the connotations of one into flying off the lick of another. ... Elements in a paratactic list always open up into a matrix of immanent universes. Each of the elements in a list is hypotactically stacked in relation to the immanence of what it is next to, what it abuts to and differs from. such hypotaxis is virtual, that is, for its actualization it demands power to the imagination.
// Matthew Fuller, Media Ecologies: Materialist Energies in Art and Technoculture

regarding daunting infinitude -- take heart, then, from one of Peter Davidson's "theses" in his The Universal Baroque (2007): "Baroque art is never at a loss: it has evolved a way of dealing with reality."

very useful article. I would love to follow you on twitter. By the way, did anyone hear that some chinese hacker had hacked twitter yesterday again.
[url=http://amazon.reviewazone.com/]Doris[/url]

great quote from a great book! :)

I am the kind of hombre who enjoys to seek radical things. Right now I am fabricating my private photovoltaic panels. I am managing it all by myself without the help of my men. I am utilizing the internet as the only path to acheive this. I encountered a really brilliant site that explains how to contruct photovoltaic panels and wind generators. The web site explains all the steps needed for solar panel construction.

I am not really sure about how precise the info given there is. If some guys over here who have experience with these things can have a look and give your feedback in the page it will be grand and I would highly value it, because I extremely passion [URL=http://solar-panel-construction.com]solar panel construction[/URL].

Thanks for reading this. U people are the best.