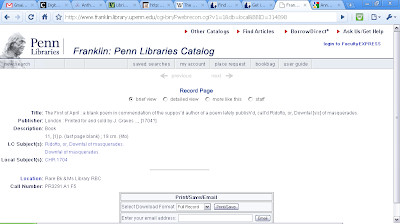 Can you read that?
It's a catalog entry for "The First of April: a blank poem in commendation of the suppos'd author of a poem lately publish'd, call'd Ridotto, or, Downfal of masquerades," printed in London in -- 1704? Sometime after 1723 is more likely, since that's when the Ridotto; or, Downfall of Masquerades was published. What's curious about this poem --

-- is that it's a blank poem. After the title page and a dedication -- "To No Body," of course -- the paper is blank, save the occasional asterisk indicating footnotes. One, marked by a dagger in the center of the page, reads: "An Elleipsis, or leaving something to be understood by the Reader."
Has anyone seen this pamphlet?
I haven't. I originally noticed its citation while poking through D. F. Foxon's English Verse, 1701-1750 at Rare Book School. Quite helpfully, Foxon includes a index of oddities he came across during the twenty-five years he spent compiling and refining his bibliography. One category, "blanks," caught my eye, given the recent interest in the topic of "blankness" by Lisa Gitelman (see the video below) and Peter Stallybrass.

I dug around a bit more and found this copy -- the only extant copy? -- in Penn's collection, as well as a single mention in the Annual Bibliography of English Language and Literature (Vol. 45) of the poem's mention in the London Mercury of May 1928. 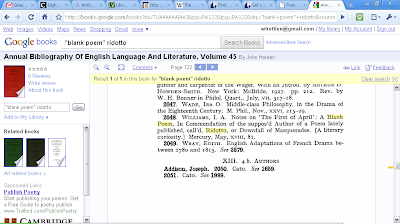 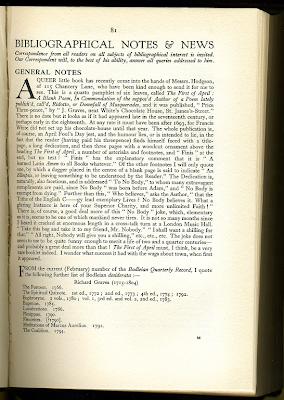 A queer little book has recently come into the hands of Messrs. Hodgson, of 115 Chancery Lane, who have been kind enough to send it for me to see. This is a quarto pamphlet of six leaves, called The First of April : A Blank Poem, In Commendation of the suppos'd Author of a Poem lately publish'd, call'd, Ridotto, or Downfall of Masquerades, and it was published, "Price Three-pence," by "J. Graves, next White's Chocolate House, St. James's-Street." There is no date but it looks as if it had appeared late in the seventeenth century, or perhaps early in the eighteenth. At any rate it must have been after 1693, for Francis White did not set up his chocolate-house until later that year. [Good to know.] The whole publication is, of course, an April Fool's Day jest, and the humour lies, or is intended to lie, in the fact that the reader (having paid his threepence) finds himself faced with a title-page, a long dedication, and then three pages with a woodcut ornament above the heading The First of April, a number of asterisks and footnotes, and "Finis" at the end, but no text! [...] The Dedication is, naturally, also facetious, and is addrsesed "To No Body," to whom many extravagant compliments are paid, since No Body "was born before Adam," and "No Body is exempt from dying." Further than this, "Who believes," asks the Author, "that the Tithe of the English C---gy lead exemplary Lives? No Body believes it. What a glaring Instance is here of your Superior Charity, and more unlimited Faith!" There is, of course, a good deal more of this "No Body" joke, which, elementary as it is, seems to be one of which mankind never tires. [...] The joke does not seem to me to be quite funny enough to merit a life of two and a quarter centuries -- and probably a great deal more than that!

Williams is right about that. It's clever, though. We tend to see the poetic deployment of "blankness" as modern or even post-modern; it's terrain for Derrida and Blanchot reading Mallarmé writing about the "blankness of the white paper; a significant silence that it is no less lovely to compose than verse." It's the silence of Cage; it's the whiteness of margins whose vacuum of signification has sucked up an excess of significance. It's the blank stare. If Shakespeare invented human nature through language -- and Keats inked the blank pages of Shakespeare's Poetical Works with his own handwritten sonnets -- we've perfected the alchemy of turning absence to presence, of creating from a profoundly uncreative void.
So what is this "queer little book" doing? Paper was still expensive around this time, we're told. It would have made up the bulk of any printer's expenses in producing a book. Studies in marginalia, like Will Sherman's Used Books, show how earlier Renaissance readers often exploited the blank paper in books as writing pads; and why paper-intensive projects, like John Foxe's commonplace book of 1,200 all-but-blank pages, were such a risk for printers. (Foxe's commonplace book failed, the unsold sheets recycled to print two later texts -- take a look at Sherman's discussion around page 138 of Used Books). Although produced over a century later, this blank poem still seems a "waste" economically, especially for an April Fool's joke.
And clearly "blankness" isn't being theorized the way it is in, say, Mallarmé. Here, the "First of April" is the blank -- the Ridotto it "commends" is the blank -- in short, blankness is sarcasm; it signifies the nothingness and "No Body" of what it's supposed to celebrate. It's a conceptual poem that exploits its medium, but doesn't, it seem, rise to the level of a "poetics of blankness." Which is probably why I'm drawn to it. It's absence isn't theorized presence, but stands for simply absence itself. A No Thing ironically made known through the very "thingness" -- the necessary "thingness" -- of itself.
Of course, all this is written about a poem I've never seen firsthand -- whose existence to me is no more than a constellation of bibliographical citations. In other words, the blank poem is blank to me, blank to scholarship, blank to all but the very few who have left traces of its presence in their own work. Difficult to reproduce and impossible to anthologize, the very absence of text makes its material presence necessary, since its physical form bears the weight of signification.
So, short of trip to Penn, blank it shall remain.
file under: blankness, book history, material, media, poetry

thanks, great post.
sent me to Sherman's chapter on Sir Julius Caesar's copy of Foxe's Pandectae 1572, which precedes another blank book (save for its index), Thomas Winthrop Coit his Theological Common-Place Book, 1832 by 260 years.

A much later blank book is :
George Fabyan. What I Know About the Future of Cotton and Domestic Goods (Chicago, George Fabyan, 1905).

The blankness of its pages says, "nothing."

Hadn't heard of the Fabyan book; looked it up, though -- pretty clever! I'm wondering now about the genre of ironic blankness...

"this page intentionally left blank" is (or was ca 20+ years ago, when I labored in the margins of that field) printed on all (otherwise) blank pages of equity prospectuses, maybe bond syndication documents, &c &c.

the purpose was, you couldn't let any reader wonder whether s/he was missing something of import, that other investors weren't.

ha! I love the idea of dumb paper inducing anxiety in investors -- or rather, that paper which is just serving the function of paper producing more anxiety than the text. If it no longer functions as a transparent carrier for written communication -- WHAT IS IT, WHAT DO WE DO WITH IT? it must be marked.

I love this! A quick note to say that according to ESTC, NYU has a copy. Just in case you find yourself in New York before you get to Philly... I would *love* to see this. I still have friends at Penn and will ask if they have seen it--maybe I can get Peter to take some photos of it! Hell, maybe *I'll* go back to Philly to see it. Will tell you if I do.

oh, interesting! and I was just near NYU! Bummer. If you (or anyone else) ever checks it out, do snap some photos.