Feast of Fools: a dispatch from the edge of the gorge

Printers and booksellers almost always represent the early literary miscellany or anthology as a feast, a collation of fruits gathered in one banquet to suit a variety of tastes. While claims of heterogeneity and contemporaneity often signify only that the material has never before -- or not recently, or not legally--been published, the metaphor of a feast reveals the cultural logic of the collection. While harking back to the word's etymology, it reinscribes the paradoxical independence yet community of miscellaneous readers.
Similarly, the less common Greek term anthology, meaning a collection of flowers, marks simultaneously the distinction and the unity of the contents, the flowers garlanded within the volume. Thus Restoration and eighteenth-century booksellers emphasize that the various feast of the miscellany or anthology is designed to invite the reader not only to select those particular fruits that appeal to his or her palate, but to join the banquet.

That's Barbara Benedict, writing about early modern literary anthologies. They were, as she points out, feasts -- sites for communal reading, communal gorging on the printed word.

That's Tim Carmody, responding to one of my tweets about THATCampRTP. THATCamp is a digital humanities unconference wherein participants self-organize and -direct discussions. The upside is that it's a free-flowing discussion; the downside is the upside. If we want the carnival to have structure, we've gotta set up our own tents.
Sometimes, though, I'd rather just gorge.
I love brainstorming. Scratch that; I love brainstorming when all participants revel in the luxury of the process. Because it is a luxury, to get to sit in a comfortable chair, in a comfortable room, building castles in the sky. It's why I tend to seek out anarchists -- they're idealists, they know how to luxuriate in thought.
Knowing how to luxuriate in thought means knowing how not to get snagged on realities. When you're dreaming up your anarcho-primitivist commune over home-brew mead, you don't stop to ask who'll be its future apiary supplier. Honey will continue to flow from buttery hives of stinger-less bees, and that's all anyone really needs to know.
When you go to a potluck, you check your reality at the door. You feast.
The Anglo-Saxons knew how to feast. In Beowulf, words are wasted on the feast at Heorot, where an attendant "bær hroden ealowæge, / scencte scir wered" [bore an adorned ale-cup, pouring bright, sweet mead] (495-6). Scops sing; "þær wæs hæleða dream." (Grendel knew how to gorge, too, biting on bone-locks ("bat banlocan"), gobbling hot blood from the Danes' veins.)
Late medieval English folk definitely knew how to feast. In a Saturnalian brawl, delightfully dubbed the Feast of Fools, young people elected a mock bishop as the Lord of Misrule, the Archbishop of Dolts, the Abbot of Unreason. It's a carnivalesque tradition bordering on the dangerous and easily bleeding into violence. 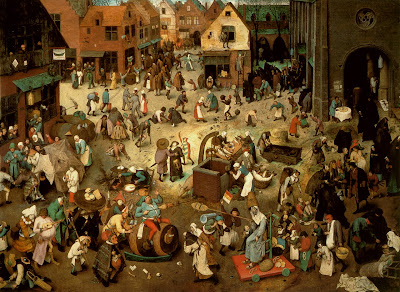 [Pieter Bruegel, The Fight Between Carnival and Lent (1559)]
(When it's really biting cold out, and I forget a jacket or a scarf (as I often do; no matter how much experience I have with weather, I always forget it exists), I think of the tailor King Jan of the Münster Rebellion (1534-1535), a stark raving madman who stripped naked to run the icy streets of his scared-shitless anarchist commune. Looking back to the Feast of Fools; or forward to suicide-bombing terrorists?)

Step away from the edge for a moment (the other kind of gorge) and think formally about the metaphor. There's a table; it has dishes on it, from the sweet to the savory, from simple fruits and nuts to stuffed meats and sauces. There's drink. There might be music -- music too loud for anything more than suggestive physical expressions; gesture, dance. Everything points away from our normal modes of (scholarly, scholastic) communication towards a lawless outside -- but an outside nonetheless (as Tim points out) contained within a Heorot. The rules no longer apply here, in this place, at this gathering. Here, where the Lord of Misrule abides.
I want more scholarly feasting. THATCamp has the potential to be a feast and, at its best moments last weekend in Durham, was. But to make the feast work, we have to temporarily shelve reality. Which means shelving the words "standards" and "best practices." There's a time for details, and communal brain-gorges aren't it.
An example. When someone playfully says wouldn't it be cool if you could wallpaper your office with a touchscreen bookshelf? (as John McVey did say to me this summer -- John is someone who knows how to intellectually feast), you don't ask how that would work with Apple's DRM policy. You grin and toss the ball back. As in: ooo! you could instantly customize the colors!
The urge to feast is systematically rooted out of us, those of us with formal academic training. Gluttony is a mortal sin to be refined into dialectic -- something more controlled, more abstemious in its rhetoric. You're supposed to be excited; but not too excited. Language comes from your lips, not your fingers. You absolutely should not (as I often do) slosh your drink all over your nice conference shirt during the breaks. If you slosh your drink, your hands are gesticulating too much. Don't move your hands (I tell myself).
At a feast, your lips are for laughing, your hands for dancing, and no one gives a shit how crazy you sound. That's the point.
How our cultural heritage will be digitized and our digital heritage maintained are serious and sobering discussions; they end with action items and task forces deployed in the light of day. But we still need spaces for feasting -- the brainstorming haze, where you say things you don't quite remember the next day but you feel excited, energized. The best sessions at THATCampRTP left me eager to begin playing.
Which is now what I'm going to go do. That, and have some lunch.

I'm all with you on the brainstorming haze. In most conferences, if this feast of ideas happens at all, it happens outside of the official conference---in the lobbies and bars and the train rides home.

The THATCamp unconference model is a powerful corrective to the typical conference, but it can, unfortunately, trend back toward the practical and the quotidian. For example, a chorus at THATCamp in Virginia last May was "less yacking and more hacking"---which, as much as I appreciate hacking, I take as a criticism of the pie-in-the-sky yacking-qua-scheming that in fact should be part of an anti-conference ethos.

Perhaps we need another category of conference---an explicitly funconference, in which the order of the day is play, not work.

Agreed; although I'm not sure we need another category of conference -- as awesomely oxymoronic as the term "funconference" is -- so much as a delimiting of space within sessions. If a few local archivists want to use the time to plan a project they're collaborating on, that's awesome -- it should just be explicit up front, during the pitch. Alternatively, those who want to brainstorm should set aside the nitty-gritty, then create a space for the haze (which humanists seem generally bad at doing).

Which is all to say perhaps it's a genre we're still learning -- one that needs to be pretty clear about participants taking charge of sessions while honoring (not homogenizing) the diversity of the gathering.

THATCampRTP was great. I'm so happy Jade took the initiative to organize it, and genuinely hope we have another one on next year. We can only get better at this kind of play-work by doing it.

One thing that Ethan Watrall built into the Great Lakes THATCamp was a Harry Potteresque "Room of Requirement"---a room that was kept open for spontaneous sessions or discussions, or silent writing or reflection, or whatever else you needed it to be at any given time. I wasn't there, but I've heard that having this Room of Requirement was quite fantastic. Maybe this kind of space would allow for that openness and play, that carnival ethos?