by Whitney
There's an upcoming exhibit and symposium at Duke on flap anatomies -- that is, anatomical prints with movable, paste-in body parts. (I've shared a few previously on this blog.) The exhibit covers the sixteenth through the twenty-first centuries and includes some lovely examples of early modern fugitive sheets, as well as a some intricate, quasi-pop-up style "moving atlases of the human body" designed in the late nineteenth century. A website with some images and video of the collection will be up sometime in the next few months. 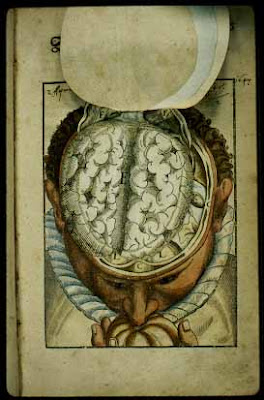 An example of a flap anatomy, from Georg Bartisch's Ophthalmodouleia (1583). Image from the Duke University Medical Center Library.
In the meantime, you can imagine my delight when I stumbled upon this flap-anatomy dress: 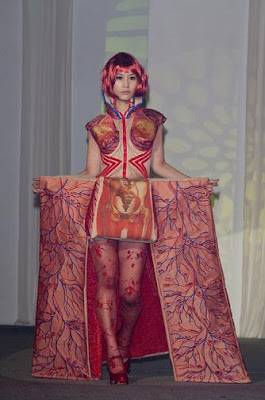 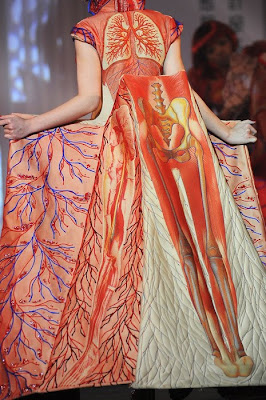 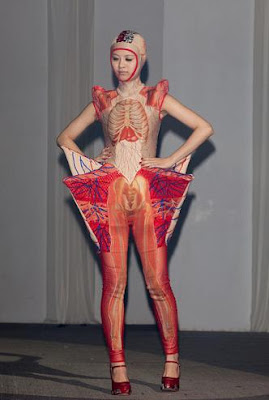 From a Fall 2010 Fashion Week event at Shih Chien University. Information and images pulled from here and here and here. More images here.
As with the fugitive sheets, flaps -- here, fabric flaps -- open to reveal different bodily systems. It isn't just the structural relationship that caught my eye, though. It's the model's pose. 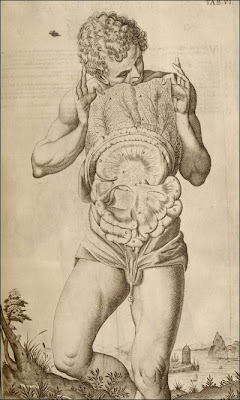 Giulio Casserio (anatomist) and Odoardo Fialetti (artist), Tabulae Anatomicae... (Venice, 1627). Image from Dream Anatomy; visit this link for higher resolution images and more information.
As Michael Sappol (who'll be talking at the upcoming Duke symposium) points out in Dream Anatomy, the illustrations in many sixteenth- and seventeenth-century anatomies are coy, almost flirtatious. The models -- some of them repurposed from other texts, including, in the case of Charles Estienne's De dissectione (1545), from pornography -- playfully pull up their skin to reveal neatly labeled organs. "The anatomist was a performer," Sappol writes; "anatomy required showmanship." 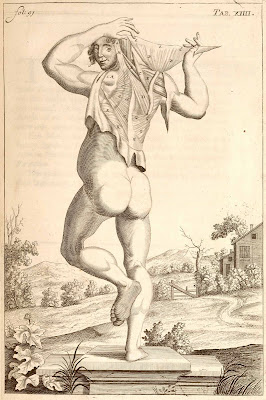 John Browne, A compleat treatise of the muscles, as they appear in the humane body, and arise in dissection... (London, 1681). Image from Dream Anatomy; visit this link for higher resolution images and more information.
The two copperplate engravings shown above don't contain any moving parts; instead, the models move themselves, performing their own dissections. They're alive -- feet are lifted, muscled held tight -- but engaged in acts typically done on and to the dead. Thus if flap anatomies put the reader in the position of the performer-anatomist, animating inanimate objects with her hands, here the inanimate animate themselves: they illustrate impossible acts.
In fact, it would be interesting to consider these images alongside, for instance, Robert Hooke's Micrographia (1665) or Nehemiah Grew's The Anatomy of Plants (1682), two Royal Society publications on microscopy. Both Hooke's and Grew's work is stuffed with gorgeous plates magnifying subvisible worlds in the same way these anatomies reveal new dimensions just beneath the surface of the human body.
More on the flap anatomies exhibit and symposium soon. And, yes, in case you're wondering: I would totally wear that dress.
file under: anatomy, book history, fashion, flapbook

thanks for another thought-provoking post. my SHARP paper is about art in science (estienne / vesalius) -- this post is great fodder for the revisions i'll be making before july!

Lovely -- let's chat digitally about it sometime, as I'm also working on something involving Estienne.

Also trying to find some actual *bibliographic* information on the production process of the flaps during the hand press period, if you have any leads. I know with (some) volvelles, the printer would have included a set of cut-n-paste instructions for the binder; however, I'm guessing flap anatomies required much closer collaboration between artist, printer, anatomist and binder/paster. (One of the rarer items in Duke's collection, for instance, was printed privately by the author using his own press.)