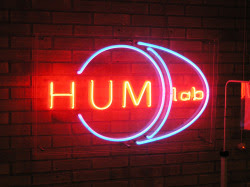 I just returned from Umeå University in Sweden, where I was visiting HUMlab. It's a neat place -- part digital humanities lab, part humanities meeting space, with a diverse* set of post-docs, staff and faculty filtering through. Patrik Svennson, whose work I've mentioned here before -- in particular, he has an excellent series of DHQ articles surveying the field of "digital humanities" writ large -- runs the lab.
As you might expect if you know Patrik's work, the lab is conscious of its layout and design, with two connected, multipurpose rooms, the one a modular computer lab-cum-classroom, the other a workshop space with around six (probably more?) screens lining the walls, including one enormous backlit projector. Last week, the latter room still held a video installation by Dutch filmmaker Iris Piers, in which the screens were hooked to sensors that adjusted the brightness of the film according to how close the viewer stood to the screen. Although the lab colonizes a portion of the library's basement, it has more of an arts+design feel than a typical library workspace. As I've written on HyperStudio's blog, I think this is an interesting model to push more in the humanities. 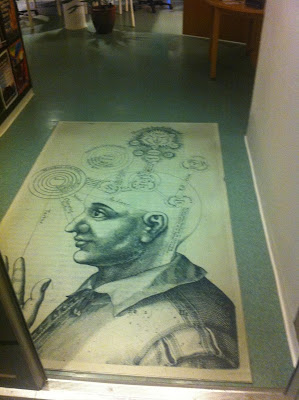 Alan Liu was also visiting HUMlab last week. He gave a great talk on "Close, Distant and Unexpected Readings," in which he carefully unpacked the histories of both the New Critics' treatment of the poem as a thing -- as "globed fruit" that "should not mean / But be" -- and the kind of statistical analysis of texts advocated by Franco Moretti and his lab at Stanford. While Prof. Liu began by distinguishing between close and distant forms of critical reading, he eventually wove the two together through two similar origin stories. He concluded by sharing a few examples of digital projects his students have created, from Facebook stagings of Shakespeare to an interpretive video that frames the structure of a Borges story through different kinds of film shots. It became clear that, although close and distant reading are often set in opposition to one another, they're more like criss-crossing tracks headed in the same interpretive direction, whereas the new methods being pioneered by his students radically transformed the critic's relationship to the text, imagining it as performative and adaptive.
You can view the video of the entire talk here.
While at HUMlab, I gave a talk also, entitled "The Book Rebels: Fore-edge Paintings, Flap Anatomies and Other Acts of Digital Resistance." I was planning on publishing the text of it here, and still might use portions as fodder for future posts; but for now, the full video is available here.
* When I say "diverse," I don't just mean a few literary historians and a few cultural historians "bridging the gaps between their disciplines." I met someone from a religion department, Tim Hutchings, studying online Christian testimonials; Astrid Mager, an STS scholar studying search engines; Jim Barrett, working on an English literature dissertation on digital storytelling; Heather Richards-Risetto, an archaeologist using GIS and 3D visualizations to reconstruct ancient Mayan cities; Simon Lindgren, a professor of sociology writing about online participatory culture; Mike Frangos, a modernist and media historian with a PhD in English from UC-Santa Barbara; Cecelia Lindhe, also assistant director of the lab, with a PhD in Comparative Literature, working on media archaeological approaches to studying medieval art; Emma Ewadotter, a PhD student in art history, also working on digital representations of medieval art; Finn Arne Jorgensen, another STS scholar with a forthcoming book on the history of recycling; the list goes on. Their approaches and disciplinary training vary widely, perhaps more so than any humanities lab I know of in the states, and my transdisciplinary muscle (wasted a bit since entering an English department) got a good workout trying to locate nodes of intellectual contact and common methodologies.
file under: digital humanities