Building with Books I: "Stump Speech"

by Whitney
(This post and the next are companion pieces about two related projects I've finished. I've been sadly dilatory in writing about these projects but am happy to share, finally, a bit about my experiences with them.)


In July 2011, I was a scholar-in-residence at Elsewhere, a thrift-store-turned-"living museum" and all-around wonderfully creative, collective space in Greensboro. While there I completed Stump Speech, a big, chatty hunk-o'-stump made from books. Text it a question, and it responds with a random phrase pulled from one of books in the stump. 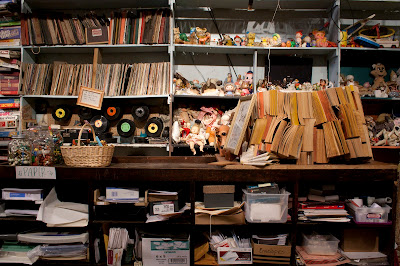 Some recent questions put to the Stump by museum-goers:

QUESTION: did you steal the poem?
STUMP: By the efforts of a persistent crew.

QUESTION: why is yo mama so fat?
STUMP: Souriez-moi de cette bouche charmante!

QUESTION: why did you allow such blatant corporate branding?
STUMP: Maybe it was because it was so like that first disastrous time I had called for Helen.

QUESTION: what is the color of rain?
STUMP: It was a silent battle and he became aware of that silence and wondered at it.

QUESTION: what is the best way to woo a woman?
STUMP: His countenance, in this repose, was mild and kindly.

QUESTION: where do you find magic?
STUMP: To the west, America, he said, full of greedy fools fouling up their inheritance.

QUESTION: when does recombination first exist?
STUMP: With an effort I put away from me a mental picture of two porkers facing each other over a green baize table.

QUESTION: what type of tree were you?
STUMP: It is the first topic of conversation I heard at the coffeehouse, the Gold Doubloon.

I love the idea of a device -- your phone -- mediating your experience, your "conversation," with an object immediately in front of you. It reminds me of the Victorian era's obsession with media as mediums, mechanisms for communicating with the dead/undead. "i think the stump is haunted," someone once texted me late at night. Like an actual tree stump, Stump Speech is an archive of once-active forms of life; technology reanimates it.* 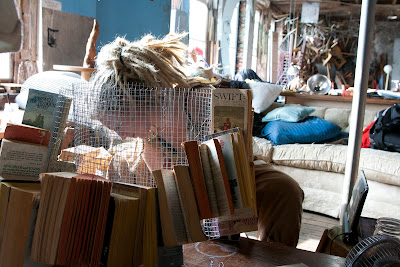 When I came to Elsewhere, I didn't plan on making a talkative hunk-o'-stump. At the time, I was doing research for my "Plant → Animal → Book" essay, and was thinking a lot about medieval zoophytes like the barnacle goose tree, as well as bibliographic metaphors in botany -- that is, how the form and functionality of books gave shape to our earliest scientific (in the modern sense) conceptions of plant anatomy and physiology. I was loving how material the book was for seventeenth-century botanists like Nehemiah Grew. Far more than a mere platform for conveying information, the book was a physical thing to them, with a hefty weight and sophisticated structure; it folds in on itself like a seed and opens out like a flower as its "leaves" curl back. Although I had lived with books (and plants) my whole life, they had never had for me the kind of structural resonances that they had for Nehemiah Grew. I wanted to get deeper into the secret life of the book.

What better way than to spend many hours a day, delicately weaving together crumbling paperbacks?

In all the thousands of hours I've spent reading, I've never felt like I knew books better than I did during those three weeks of not reading them. I got to know how much force a spine could take before cracking; which kinds of binding glues still stretches after three decades in storage, and which dries out; the angles at which pages fanned, relative to a book's width; how the structure of a book's spine (glued or bound) affects the "chunking" that occurs when it's laid flat and open; how the weight of the paper determines the curve of a page as it turns; and so on, and so on. Though such lessons seem insignificant, they absolutely are not to a book historian: in fact, they signal entire cultures and histories in the social life of print. These material differences have framed and altered how people across time have moved through texts. 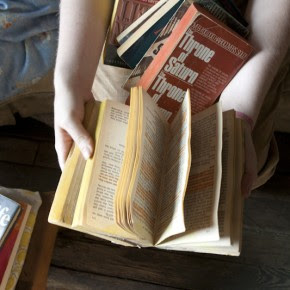 A second motivation for the stump: my desire to showcase one of the book's most artistically underutilized facets, its fore-edge. Some extant early modern books bear titles or markings along the fore-edge, indicating their owners stored their books edge out. In the nineteenth-century, fore-edge paintings became something of a fad, as evident in this online exhibit from the Boston Public Library. Yet today, the fore-edge is conceptually blank zone on the book, barely noticed. With the stump, I wanted to showcase this versatile part of the book's structure -- the soft crumplings where readers thumbed their pages; the mottled marbling of molds and water damage; the beautiful variety of colors that tip the page of vintage paperbacks, from highlighter yellows to dried-blood browns. 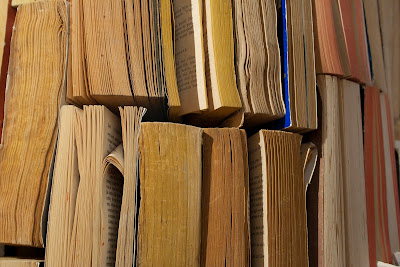 An intended consequence is that the stump acts as a kind of alternative Ramellian book wheel, facilitating random reading across different texts. I've watched people approach it cautiously, then peek into its bark, read a bit, pull apart another book, then read a little more. The stump has an unexpected depth and fluidity, like some rustling sea of paper you can dip in and out of. Someone once told me a circle of people had been reading across it collaboratively, each person picking a bit and sharing it as they gathered around the stump's base. An alternative arrangement of books generates new ways of experiencing them, of interacting with them. 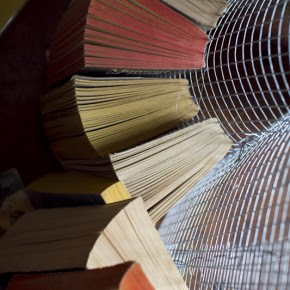 [Part of Elsewhere's mission is to preserve its "collection," a mass of stuff that gets assembled, sorted, mixed together mashed up and moved about as artists and interns cycle through the museum each month. Most of the art there can be disassembled and in fact many of my favorite pieces are repurposed from earlier works. Because most of the books I used were part of Elsewhere's permanent collection, I couldn't harm them in making the stump; so I wove the books, fore-edge out, to a structure devised of hardware fabric.] 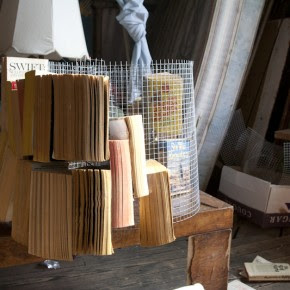 Ultimately, then, the project was more about my own learning process than it was about creating an object. I was brought to Elsewhere as a scholar-in-residence, and while some of the artist residents seemed a little stumped (har har) as to why a PhD student was creating what looked (kind of?) like art, the experience was, for me, a scholarly one, since it was borne of research I was doing, and was done to help answer historical questions I was pursuing. I make this point not to draw arbitrary distinctions between scholarly and artistic processes but because, right now, it seems more urgent that we invite creative "t(h)nkering" into scholarship rather than vice versa. In fact, it doesn't surprise me that the three scholars-in-residence at Elsewhere last summer ended up making things: we were starved for opportunities to engage with the fruits of our research in ways other than writing, in modes other than argumentative, and in media other than text.

We need spaces like that fostered at Elsewhere right now. They are models of what humanities labs could be, if these labs 1) were politically engaged, 2) were embedded in the communities they seek to serve and 3) following that, were constituted outside the institutional power structures that most only mildly critique at best.

*My friend and collaborator Nick Bruns is largely responsible for getting the stump to chat. Nick was helping me with the project as a way of getting his feet wet with some programming skills. He had no PHP or SQL skills going into the project, and while I had a little bit of knowledge, I was too busy with the stump to give him much help. So instead of a leisurely wade, Nick got tossed into the deep end of the pool (sorry, Nick) and within three weeks, had taught himself enough not only to get the SMS call-and-response working, but to set up a decision tree such that certain types of questions ("why," "what," "how," etc.) resulted in different kinds of answers from the stump. Nick has long since buzzed past me in terms of coder knowledge and is now completing a master's in computer science at Cornell. So if you ever need a creative, quick-learning programmer...
file under: art, books, projects