by Whitney
(This post and the one before it are companion pieces about two related projects I've finished. I've been sadly dilatory in writing about these projects but am happy to share, finally, a bit about my experiences with them.)

This past spring I collaborated with Elsewhere on "Bibliography," an installation in an empty storefront in the old Trust Building in downtown Durham. The work was part of the Durham Storefront Project, an exciting initiative that makes Durham's empty storefronts bloom each spring with local art. 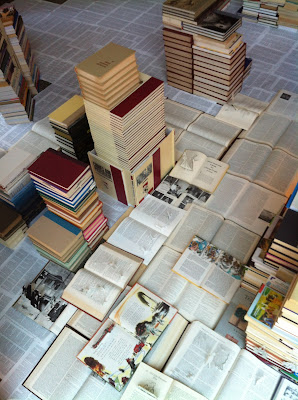 Bibliography was an extension of Stump Speech, a book stump I assembled as part of my time at Elsewhere in July 2011. While the stump emerged from a research project on book structures as conceptual models for plant physiology, Bibliography emerged from an interest in the relationship between the structure of books -- big, brickish things -- and the structure of cities. City sidewalks as open books; city blocks as bookshelves storing buildings, spines out. Cities are living archives, and create spaces for conversation and exchange.

More than any city, though, we wanted to evoke an experience of Durham. The building we chose, 212 W. Main Street, was once a landmark in town, the tallest building in North Carolina at the time of its construction in 1905 and home to Durham's (and allegedly the entire South's) first elevator. It encapsulates the city's turn-of-the-century expansion, driven by the prosperity of the Bull Durham Tobacco company, in its uniquely-curved corner that once jutted out like the prow of a ship. 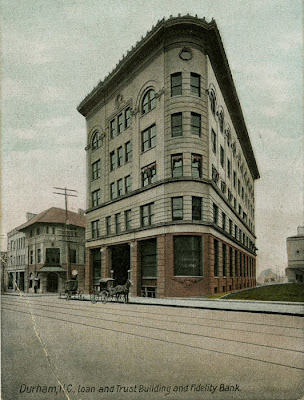 The Trust Building’s curved corneris now sadly occluded at the street level, and its stature has long since been dwarfed by Durham’s handful of skyscrapers -- 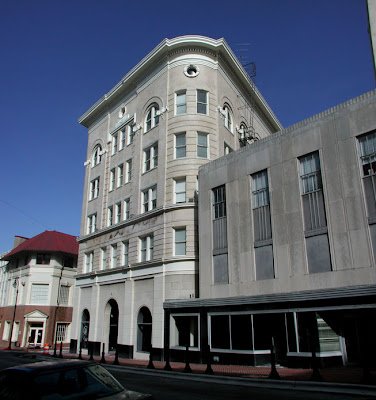 -- but we knew we wanted to represent this jutting prow, somehow. Other than that, we had no plans,  just six or so people, six or so hours, two sunny storefront windows and hundreds of books. This was an one-off, on-site collaboration.

We started by sorting. Funny how, when faced with a pile of books, so many of us instinctively start sorting -- by author, by title, by topic, by color. We sorted by size. It took us hours. (One quickly learns the subtle width differences between cookbooks, computer manuals and fitness hot-tos!) 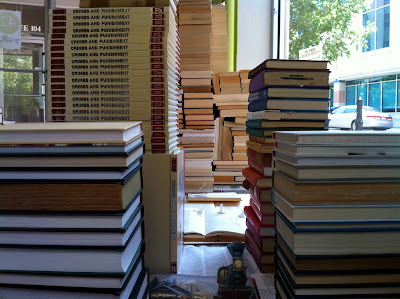 Once the books were sorted by size, we laid out an arc between the two corner windows with boxes. Some of us began laying the books like masonry in the front, while others began stacking paperbacks, folded back and taped so they flipped open into a curved fan of pages. Unfortunately, I don't seem to have any images of this; but, this became the Trust Building's prow. 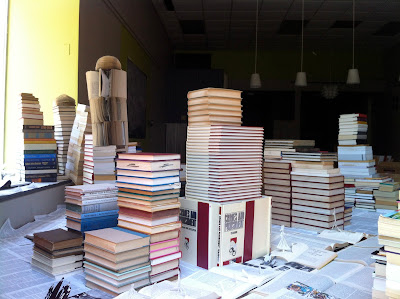 I had drawn and cut out some silhouettes of people walking from old encyclopedias, which we laid in front of the buildings. From there, we built out according to our whims, adding pop-ups from found images in old books to create gardens and joggers and even an oncoming train, rushing toward a giant dancer in '80s-era fitness gear. 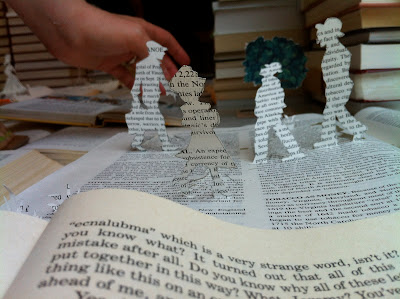 Open encyclopedias paved the streets, while pop-ups cut from the books enlivened the street corners. 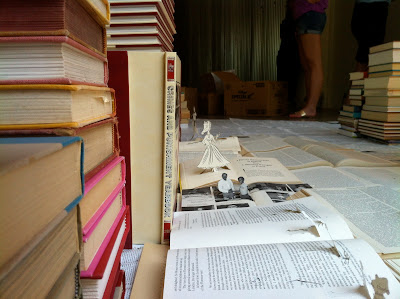 The resulting structure was neither library nor city, but a kind of biblio-geography that captured, in its own ramshackle way, the spirit of Durham's rambling, low-rise cityscape. Although I couldn't snap any decent photos from the outside, where visitors could peer into the city, it was fun to watch the bookstacks cast long shadows across the empty floor of the building, as the sun moved from one of the storefront windows to the next. 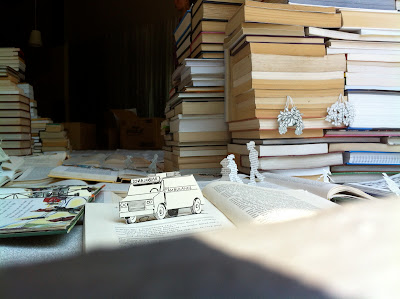 As a finishing touch, I set up a simple SMS system, like that used in Stump Speech, whereby any passerby could text the city, and receive back a transmission of biblio-chatter from inside its bookish buildings. 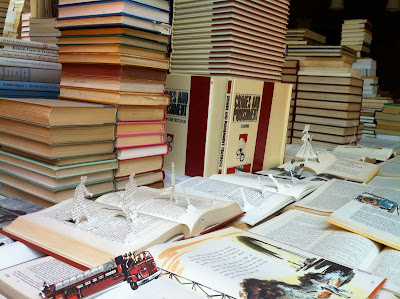 Those with smartphones could visit a website to observe how Durhamites had been interacting with their shadow book city. A few choice examples:

QUESTION: what do people do for fun in the book city?
BOOK CITY: gods which his chosen chariots, and stand before

QUESTION: What is the best life?
BOOK CITY: foreigners? for their faces were backward, and to

QUESTION: what is your favorite book about science?
BOOK CITY: These may include feedback squeals during sound checks

QUESTION: (Who do you love?)
BOOK CITY: Moses: and Shimron. And there for he would 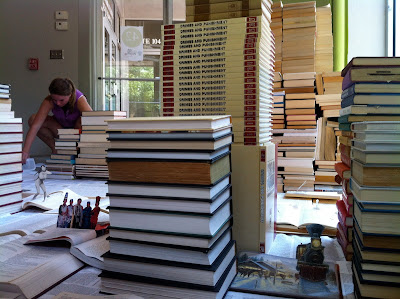 All the books were received as donations, and went back into the community as donations, most of them to an afterschool program for children, some to a prison desperately in need of reading materials. I don't imagine some of the older, odder books -- like a how-to on molding gelatinized foodstuffs into various shapes -- will help either children or prisoners much; but I do hope a stray pop-up here and there may make the reading experience a little more magical.
file under: art, books, projects

Such beautiful projects, Whitney! I've been following and admiring your work for quite some time.

Have you seen this video? http://vimeo.com/2295261 I see a lot of parallels to Bibliography.

Thanks, Shannon! And thanks for sharing. That video is wonderful.

Beautiful Images created, I never saw such a creation before. Weldone Whitney ...