by Whitney
Inventive visual design and typography have made Laurence Sterne's Tristram Shandy a canonical favorite among all sorts of "material book" types, with the black page after Yorick's death -- 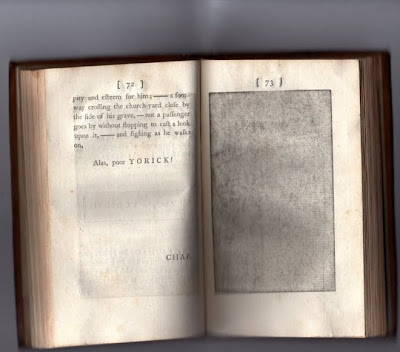 -- typically cited as one of the book's enduring innovations. In fact, the Laurence Sterne Trust hosted a quite lovely exhibit on the 250th anniversary of the black page, inviting 73 artists (note the page number) to reinterpret Sterne's "most famous experimental device." 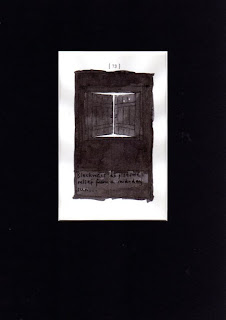 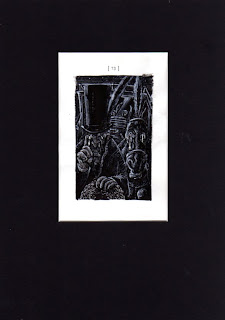 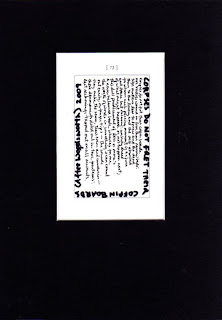 The thing is, though: while Sterne's use of the black page in a literary story is innovative, the mourning page itself is not so much. In fact, Sterne is drawing on a (by then 150-year-old) tradition -- perhaps "seventeenth-century phenomenon" would be more accurate? -- of including mourning pages or all-black prints, sometimes with a coat of arms or other insignia etched out, in printed funeral sermons and memorial verse. 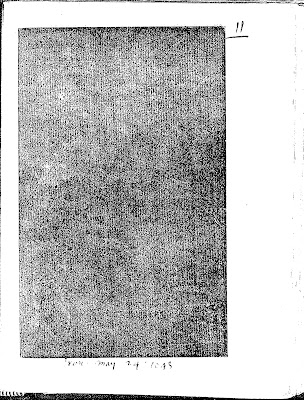 Anonymous, An elegy on the death of the Right Honourable Spencer, Earle of Northampton, who died a conquerour at the battaile of Hopton-heath (Oxford, 1643)

Abraham Darcie, A monumentall pyramide to all posterities erected to the euer-liuing memory, and perpetuall honour of the all-vertuous and euer-glorious prince, Lodovvick, late Duke of Richmond and Lenox... (London, 1624)

Some of the earliest examples I've found come from elegies upon the death of Prince Henry, King James I's son. Henry was well loved, and his death at age 18 of typhoid fever inspired a national outpouring of grief in print. Sylvester's elegy (below) includes not only a mourning page on every verso, facing the lines, but heavy mourning borders with skeleton woodcuts framing each recto. 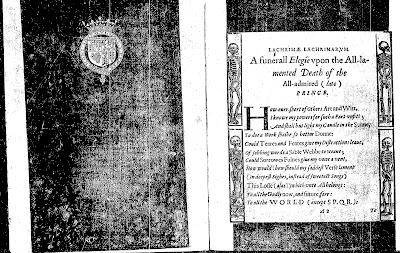 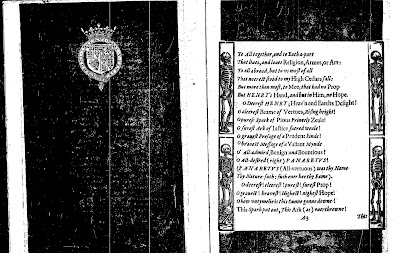 It's a bit hard to get the full impact of this printing style on the reader through grainy EEBO scans -- but I imagine the inky blackness getting on the reader's fingers, marring the margins. (Of course, ink didn't spread then like newspaper print does now; but that's what I imagine.) Because each page of text is backed by a mourning block, the verse would be dimmed; little light could filter through the page to bring the letters into relief. The entire effect is heavy with grief. Another elegy for Henry highlights the lachrymose intentions of the mourning page by including a pattern of tears: 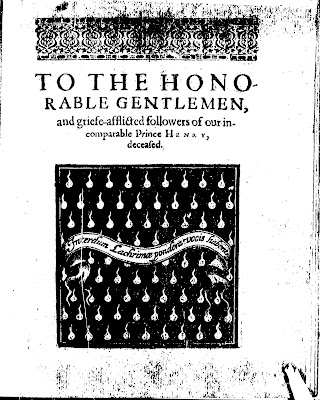 Christopher Brooke, Tvvo elegies consecrated to the neuer-dying memorie of the most worthily admyred; most hartily loued; and generally bewayled prince; Henry Prince of Wales (London, 1613)

In his elegy for Prince Henry, aptly titled Great Britaine, all in black, John Taylor incorporated not only a full mourning page, opposite a much lighter woodcut of Henry, but a kind of mourning title-page recto, backed by a second mourning block verso. To get the idea, you have to imagine how the pages are printed on a sheet, and pay close attention to the juxtapositions created by the openings. For instance, the white space in the title page was backed by another mourning page, dimming the contrast between text and border. 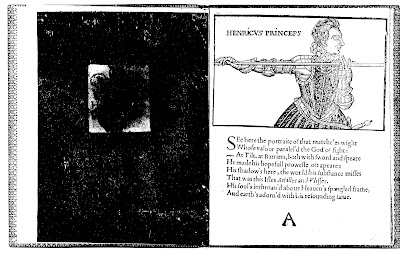 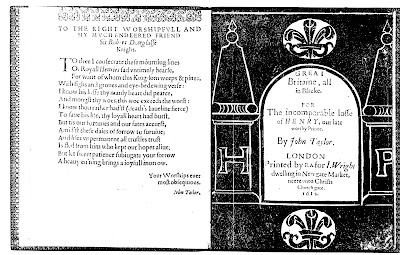 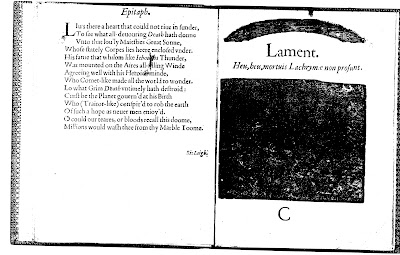 John Taylor, Great Britaine, all in blacke For the incomparable losse of Henry, our late worthy prince (London, 1612)

Upon the death of King James, Taylor produced another elegy; and while this one doesn't have a full-page mourning block, its heavy, blackened title page is part of the same tradition -- 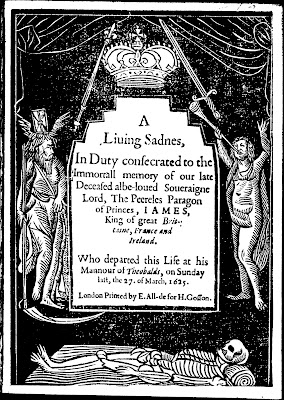 John Taylor, A liuing sadnes, in duty consecrated to the immortal memory of our late deceased albe-loued soueraigne Lord, the peereles paragon of princes, Iames, king of great Brittaine, France and Ireland (London, 1625)

-- as is Robert Markham's elegy for Sir John Burgh, which ends with a small, heavily bordered epitaph, followed by a shortened mourning block: 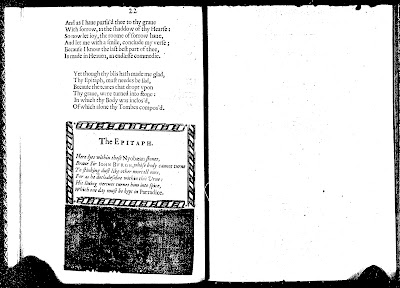 Robert Markham, The description, of that euer to be famed knight, Sir Iohn Burgh... (London, 1628)

The tradition seems to get some new steam with the beheading of Charles I. In his elegy for the martyred king -- which went through several printings -- John Quarles, like Sylvester before him, turns every verso into a mourning page. The repetition results in a kind of doleful deadening of the entire book, as the reader confronts a page black with grief at every opening. 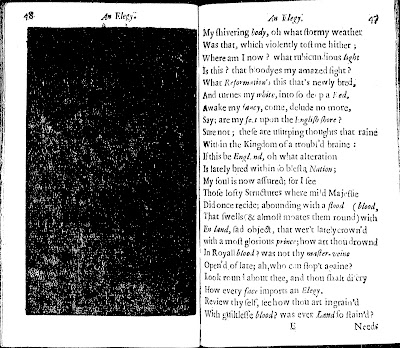 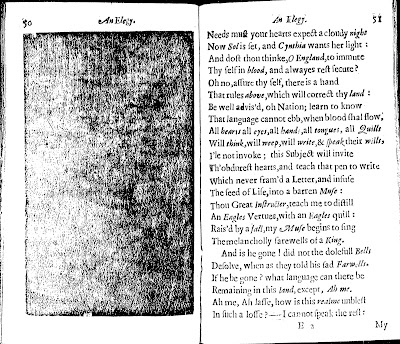 John Quarles, Regale lectum miseriae: or, A kingly bed of miserie In which is contained, a dreame: with an elegie upon the martyrdome of Charls, late King of England (London, 1649)

While not all printed elegies or funeral sermons included mourning pages, many did include mourning borders, a variant in which heavy black blocks are used to frame title pages. 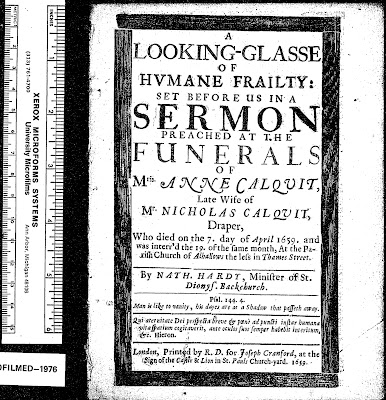 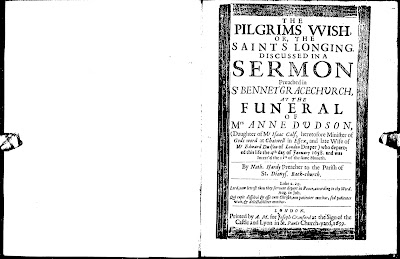 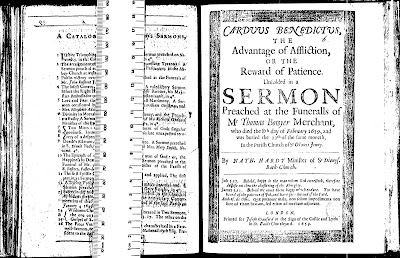 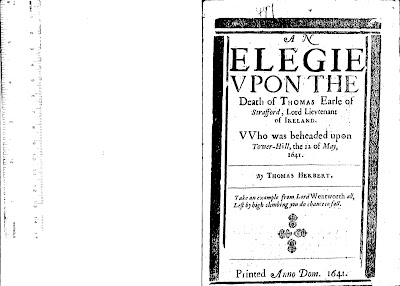 In some cases, bones, skulls and other memento mori break the black monotony of the mourning border -- 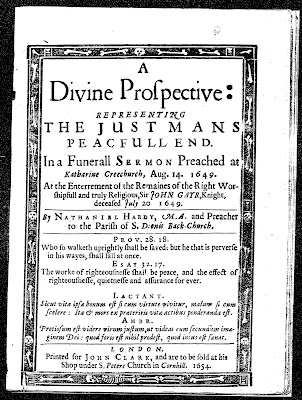 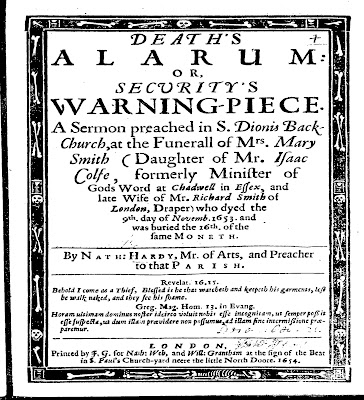 -- while in other cases, thick black borders on every page recall full-page mourning blocks: 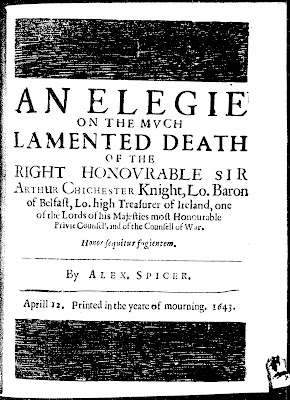 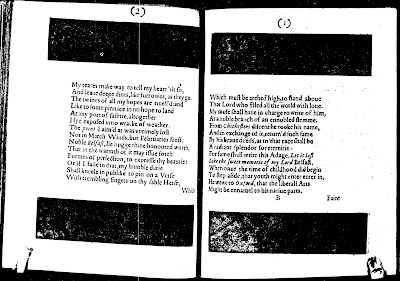 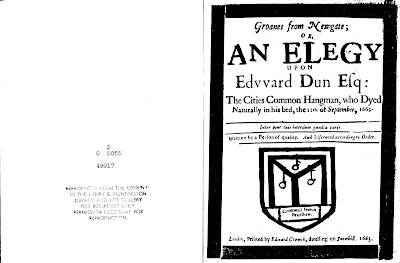 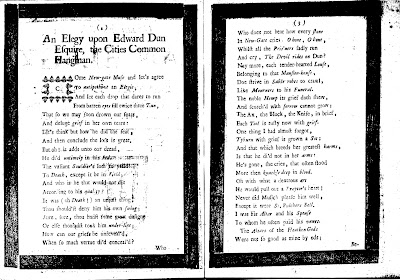 While Sterne's famous black page upon Yorick's death creatively pulls the mourning block tradition into a work of fiction, it was hardly an innovation of print in the eighteenth century. In fact, Sterne is recalling a way of making meaning through the visual design of books that flourished over one hundred years before Tristam Shandy was published. Did eighteenth-century readers recognize this move as retro, harkening back to the rhetoric of an earlier age? Why pull the elegiac print tradition into the novel? Is there an intentional linkage here to the flurry of mourning pages produced in elegies on the death of Prince Henry, then King James I, then the martyred King Charles I?

That last question is perhaps a bit of a stretch, but I'm just ignorant enough of eighteenth-century British novels to feel okay posing it. Regardless of Sterne's intentions, what seems innovative and experimental to us is less so within the context of early modern print culture, and in fact may have even seemed like a memorial to an earlier time -- as if a novelist today were to include a mezzotint engraved frontispiece covered with tissue paper.

As I was finishing up this post, I decided to check ECCO for any instances of mourning pages. The one hit for the term "mourning page" brought up this, from the second volume of William Coombe's The Philosopher in Bristol (1775) (pages 60-62): 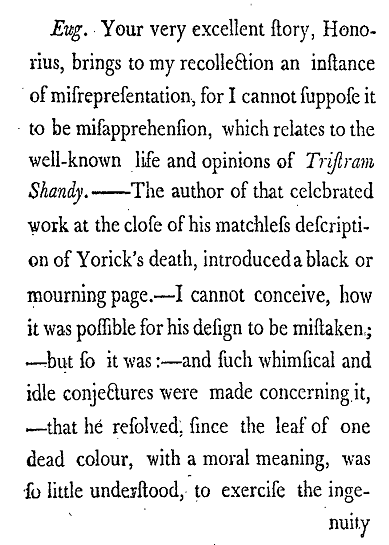 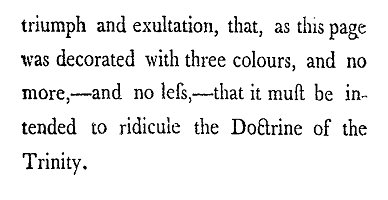 I guess that about sums it up.

I've long been fascinated by mourning pages, so many thanks for this great post! I really love how you can see the grain of the woodblock in some of the black pages--I noticed it particularly in the Quarles poem, but you can see it sometimes in some of Sylvester's, too. (And speaking of which, there are some images of Lachrymae Lachrymarum in high resolution in the Folger's database that give a bit of a sense of the depth of its inkiness: http://luna.folger.edu/luna/servlet/s/3b2tl1)

Awesome -- should have checked Luna. Thanks, Sarah! (It's my dream that EEBO starts linking to high resolution images from other sources -- keep the search functionality, ditch the crappy scans!)

Excellent discussion, Whitney, In more recent times the black border style of mourning page has made its way into newspapers and even blogs (such as Grand Text Auto and Post Position.) I wonder if the tradition is one that eventually encouraged people to turn their Web pages black for a day during the 1996 Communications Decency Act protests?

Ooo, interesting thought re: black WWW protest. One of the things that's always struck me about mourning pages is how wasteful they are -- not of ink so much as paper, which wasn't cheap. Perhaps the luxury of waste signals respect toward the dead. It'd be interesting to think about wasted black paper alongside something like Blackle, and movements (some of them confused...) about black pixels + consumption in regards to screens.

This caught my attention as I'd just finished reading Volume 1 of Perez-Galdós' 1888 novel Fortunata and Jacinta and had been puzzled by a passage describing a couple in the slums of Madrid trying to make their living by producing "mourning paper." The passage briefly describes the production process - in this case basically just a black border painted around a sheet of white paper. If you're interested, the description starts on page 139 (section 2 of part IX of Volume 1) in the Penguin edition translated into English by Agnes Moncy Gullon.

I'm so thankful to have found this page. I'm an assistant student for a literature teacher doing her PhD in silence and images in literature and she put me up to research Tristram Shandy's marbled and black page. Where can I find more info on this mourning pages theme, which I find so interesting. I'm studying emblematic and seventeenth century rhetorics so it has been a really great post to encounter! I'm also a bookbinder and a master's candidate in hispanic literature interested in the study of the book as a form (and in which way can written word make up for other semiotic systems and medias). Please get in touch with me, as you read this post!

my e-mail is linked to my blog account and you can find me on fb: www.facebook.com/notasdearte.encuadernacion THANKS!

Actually I'm interested in this topic as well. I'm doing a PhD as well, and this has nothing to do with what I study (late nineteenth century French painting) but this is great. Do you have any publications on this or is there any literature which discusses this? And is "mourning page" a commonly used term? Thanks for this great post!
-Nick

The mourning page(s) that occur in BS Johnson's Travelling People, from 1963. Apologies for the picture quality: