by Whitney
While taking Terry Belanger's course on book illustration processes at the Rare Book School this summer, I became enchanted with chromoxylography: the printing process in which a color image is built up from the successive printing of multiple woodblocks, each responsible for a single color. Not only are color wood engravings beautiful but -- as I discuss a bit below -- the process of making them strikes me as a wonderful metaphor for how we code.

So what are chromoxylographs? Although you can find examples of color woodcuts or wood engravings in many centuries, the form peaked in the nineteenth-century as a relatively cost-effective way of reproducing high-volume yet beautifully detailed color illustrations, especially within the burgeoning market for children's literature. The work of Edmund Evans -- who engraved the drawings of  Kate Greenaway, Randolph Caldecott, Walter Crane and others -- is particularly spectacular.

[Walter Crane, The Baby's Bouquet [1879]. Engravings by Edmund Evans. A scan of every opening is available here and through Project Gutenberg.]


(Sidenote: Evans wrote an autobiography, published by Clarendon Press in 1967 as The
Reminiscences of Edmund Evans. Although Oxford's editor laments the lack of historical information in his otherwise "rambling" prose, the book is full of charming tales of Evans as a young apprentice in the printing industry -- how he once ran some illustration proofs to a somber Dickens, sitting alone in his darkened house; how Thackeray was an asshole to him (Evans hoped to meet the esteemed author in heaven, so he could ask him why he'd been such a jerk); his musings about how excited he was to meet angels, so they could tell him what it was like to live in pre-Christian Rome, and what the heck electricity is. He thought Darwin's theory of evolution was God's gift to England; and he may or may not have been crushing on Kate Greenaway. Rambling or not, it's an informative and delightful short read.)

Its hard for us, accustomed to high-definition of digital photography and today's color screens, to wrap our minds around the difficulty of reproducing a tonal image. I've found it helps to imagine printing as a kind of binary system: either the page is inked, or it isn't. There's no such thing as "gray" when you're printing black on white, only the appearance of gray produced through crosshatching, or with more subtlety through later processes like aquatint etching. So if you want to print a color image, you have to either print every single color separately -- not a very economical choice; beautiful chromolithographs of this sort often went through the press dozens of times -- or devise a way to create the appearance of multiple shades from a few basic colors. This latter method points toward chromoxylography. 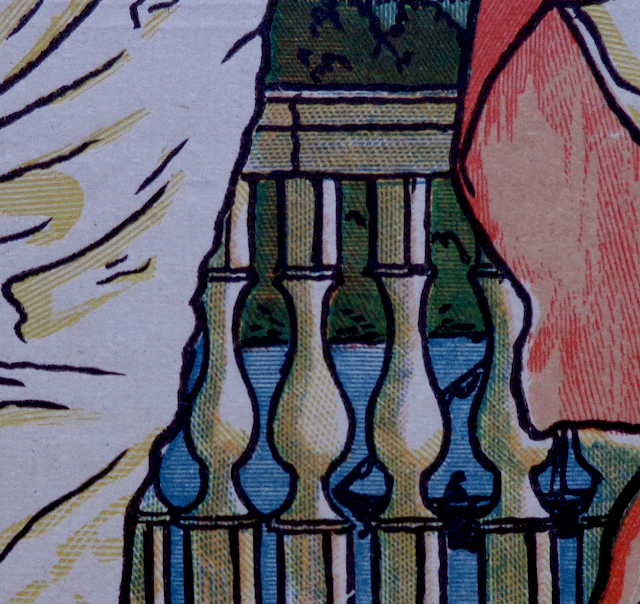 So what is the process of producing a color wood engraving? First, the engraver would cut the basic outline of an illustration into the endgrain of a block of wood. This is the key block, responsible for the black (or brown) outline of the image. Then the engraver would pull a proof of this block and send it to the illustrator to be colored by hand. This hand-colored proof becomes the basis for designing and cutting each block of color. Thus a basic outline -- a sense of the entirety of the image, both in shape and color -- must be in place before the engraver translates the polychromatic (analog) painting into a series of single-color (binary) blocks. Once you have your set of blocks, they can be reproduced as metal stereotypes, which would last through many tens of thousands of printings. 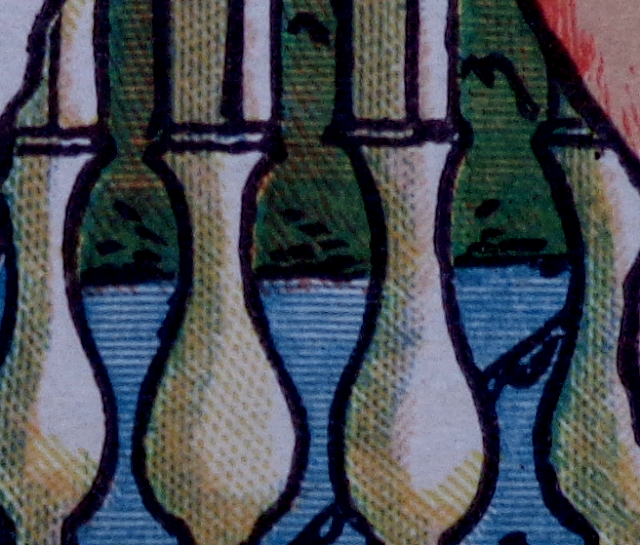 [This is a close-up of the bannister in the illustration shown above. Although the image quality is pretty poor, you can make out 4 colors: red, yellow, blue and black (the key block). The different greens are produced from blue and yellow. There's a better quality reproduction of this image in the color plates of Bamber Gascoigne's How to Identify Prints; here, I've reproduced his example by taking a picture of my own copy of The Baby's Bouquet.]

Note that, as a process for reproducing color, this is really not much different from the additive RGB system used in most modern screens. No doubt many interesting things could be said on the relationship between the two, if I knew more about the development of RGB and the 8-bit color system (anyone want to collaborate on an essay?). For now, it's sufficient to note that most of the color we see in reproductive media (in Benjamin's sense of "reproduction") is an illusion produced by combining lots of discrete units of a very limited palette. 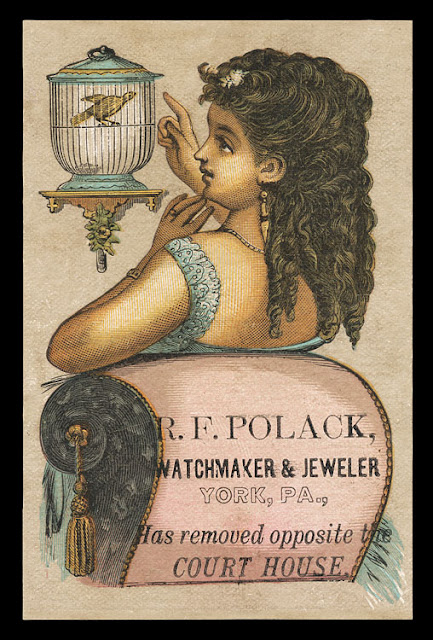 [A nice example of color wood engraving. You can see many more lovely examples here.﻿

Aside from the inherent interest of chromoxylography, it strikes me as a concise metaphor for how we code -- especially how we code for web applications. When we want to make a website do something, we start with an illustration, a vision -- in my case, this is usually a sketch drawn in a book I keep for storyboarding ideas. 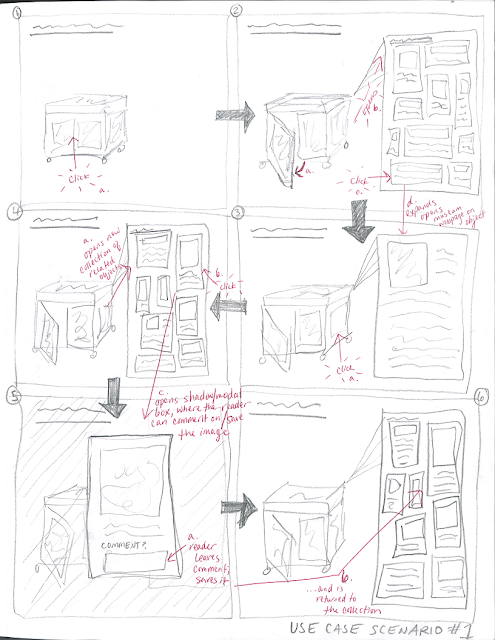 Then, sitting at my computer with my sketchbook open beside me, I produce a kind of "key block" outlining the basic elements of the site and their functionality in relation to each other. Usually this takes the form of some very basic JavaScript or jQuery attached to blank blocks with bright background colors. Like the printed key block proof, this proof-of-concept draft enables me to begin imagining how to translate my notebook sketch -- a document not constrained by my actual programming skills -- into the limited set of actions available in a given programming (or mark-up) language.

This process of translation is really where the metaphor begins to make sense; for programming is an exercise in magic through constraint. As with chromoxylography, there's something distinctly beautiful in the efficiency of programming -- something that makes the object produced under limitations more curious than the illustration it aims to reproduce. I marvel at how an engraver mentally juggled his knowledge of color and shape -- the interactions of blue and yellow under varying line widths -- in order to produce a delicate, shifting green, in the same way that Donald Knuth, in his famous defense of code as art, marvels at the little bits of trickery discovered in another's source code. Being an expert wood engraver and being a decent programmer both require one to hold continually in mind the Big Picture -- and to do so while seeing that Big Picture as the sum of all its many tiny interlocking parts. It's being able to zoom in and out without changing focus or losing your place in a massive puzzle.

I've been thinking about this metaphor -- chromoxylographic coding, coded chromoxyolography -- as I finish putting together my syllabus for a (creative) writing class I'm teaching on Digital Narratives. The course starts with each student writing a short story, fiction or nonfiction. Then, over the course of a dozen or so weeks, we rewrite our narratives in seven different media: print (i.e. a designed object for print), hypertext, sound, image, game, unfolding in time (a Twitter drama, a blog novel, netprov), and unfolding in space (ARGs, mobile narratives). Each rewriting, or remediation, will be fairly self-contained: our hypertext versions won't use sound or image; our sonic iterations won't have accompanying text. The point is to test the same basic narrative under a variety of fairly strict conditions, seeing what works with what narrative structure, what doesn't, and generally pushing the limits of narration itself.

About halfway through designing the course, it struck me that we're using a type of chromoxylographic process: our initial stories are our key blocks, while each remediation shows the same narrative in a single color. Alone, each color block might only faintly hint at the story of the key block; the final project -- in which students can combine different forms -- then brings all these single color blocks together into a multimedia story. Thus the success of our digital storytelling depends on how well we learn to blend different lines of color, mixing sound with image, the interactivity of clicking with the ludic nature of play. While this stripped-down iterative approach leaves the process of producing actual multimedia narratives until the end of the course, I'm hoping that testing each form under strict conditions will lead to a tighter, more purposeful use of digital media in the final projects.