Towards a Prototype of a Digital Harmony

by Whitney
I've been working on a prototype of a digital facsimile "edition" of the earliest extant Little Gidding Harmony. (If you don't know what a Little Gidding Harmony is, see this FAQ I wrote a few months back.) Two pages are currently accessible here. Don't click unless you have a fast connection and are using either Chrome or Safari. As per usual, IE is not recommended. 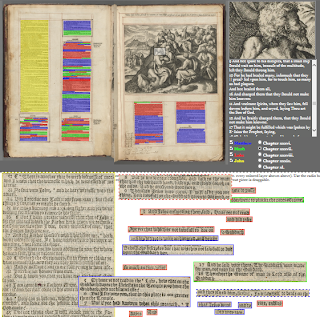 I put "edition" in quotes above because the Harmony is not really a text one would read today the way one would read, say, Shakespeare's King Lear. Most contemporary readers are interested in the Harmonies as concrete instantiations of a particular compositional process, rather than as textual products. Not only are we interested in process over product, but the product itself doesn't face the problems that so much of textual criticism has been designed to deal with. There are not multiple, variant editions of this Harmony; it's a singular, unique object. Nor is there an audience that requires an "authoritative" edition to read linearly, from start to finish. Even theories of editing that acknowledge the fundamental instability of texts – Jerome McGann and the "textual condition," Randall McLeod's notion of "transformission" – don't really capture what's happening with the books made at Little Gidding.

In fact, one could argue that the Harmonies were designed precisely to counter this instability. Thus the cut-up method is already an editorial intervention. The women of Little Gidding collated multiple printed Bibles with scissors and paste to produce their own uniquely "harmonized" edition. If we see the Harmonies from this perspective, then the task of a contemporary editor is not to pull the text into a coherent whole, but in fact to pull apart the already harmonized text. This decomposed edition would then enable an exploration of the community's cut-up process.

So in beginning to think about an "edition" of a Harmony, I was motivated less by theories of editing and more by visualization and mapping strategies. Rather than generating multiple variant readings of a text, this edition will aim to produce multiple views of the page's landscape, and different mechanisms for manipulating these views. On the one hand, it embodies aspects of my own research on the Harmonies; on the other, it is (or intends to be, eventually) a machine for producing new knowledge.

In designing this first draft of a prototype, I have attended to: 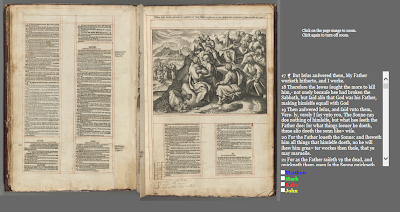 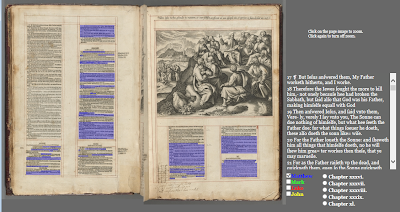 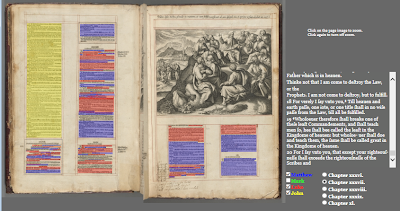 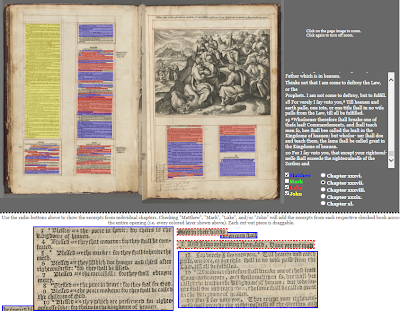 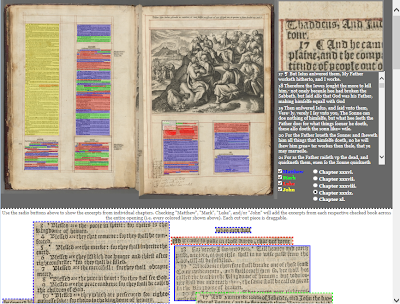 As I mention in my brief description on the page itself, a good chunk of this prototype is held together with duct tape and chewing gum at this point. The code has not been streamlined but is in fact heavy and unwieldy. You'll need a decent computer and a fast connection to access it – and even then, all functionalities won't be available in IE, and probably a few other browsers. Nonetheless, I can see how it could be streamlined, in conjunction with my marked-up transcription. The next step is to begin working toward a cleaner, more robust framework, while tweaking some of the functionalities and thinking a bit more about how to incorporate the drag-and-drop cut-ups.

A big debt of gratitude is owed to Paul Dyck and Ryan Rempel for providing me with the XML of their digital edition of the King's Harmony. This allowed me to use tags that are standard at least across our two sites. It will probably create a headache down the road – but at least now it's a shared headache. Dyck and his collaborators' writings on their digital edition have also been inspiring.